'We picked a good year to get in the business': Doug Putman on his vision for the HMV revival 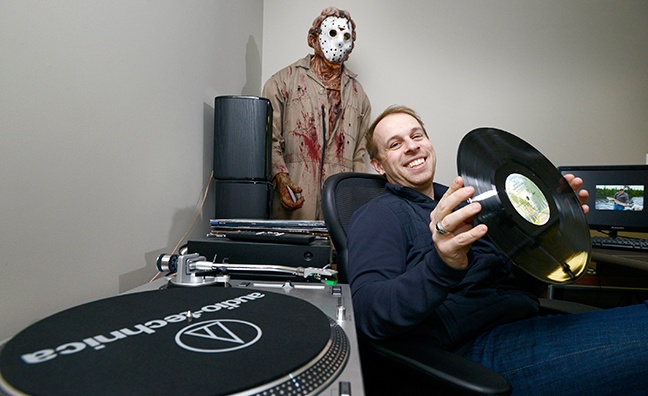 It’s just over two months since HMV was rescued by Sunrise Records CEO and owner Doug Putman, and a lot has happened already.

After the acquisition of HMV in a deal with administrators, 100 stores were kept open but 27 closed because of high costs, including the flagship Oxford Street store. However, the new HMV team negotiated with landlords to bring back 13 of the shuttered branches (Updated: HMV Westfield London has now re-opened). But three others (Crawley, Kingston and Portsmouth) have since closed. HMV has also confirmed to Music Week that three more stores are at risk of closure: Solihull, Llandudno and York.

As revealed in the latest issue of Music Week, Putman has big ambitions for HMV in-stores and the music chain has now partnered with Tixserve for its events. The industry is particularly focused on physical music this week in the run-up to Record Store Day, although HMV isn't currently part of the vinyl celebration. Here, Putman opens up about his vision for HMV...

What do you think is going to be different about your HMV compared to before?

“I think the passion is there. Obviously, I’m pretty passionate about it and that’s important, because it starts at the very top. When people know that you’re owned by a big corporation, that’s one thing. When you know you’re owned by me, I care about music and I care about having these physical stores. I’m absolutely 100% committed to this industry. I’m sure if you talked to head office, not everybody loves me or loves my style. I’m very driven and I’m going to push really hard on the team. It’s only going to get harder, but I’ve also said to them: when we come out on the other side of this, when you look at what you’ve achieved, you’re going to be amazed by it.

“Our customers are so loyal, they’re passionate, our suppliers are very passionate and loyal and have done everything to help us. From what I’ve seen, the artists are unbelievably passionate and supportive of us as well. We had Twenty One Pilots at a bunch of stores. To get such a big name band as that to come and do signings, that shows our passion. What does a [customer] want in their store? Well, they need stock of course, they want good pricing, they want knowledgeable staff, they want that experience. So I think just the fact that I’m so relentless on these things, the team buys into that and that makes a world of difference.”

What changes are you going to implement?

“It’s more about innovation as in, Why didn’t we jump harder into vinyl? Why didn’t we promote in-stores a lot more? I think there were over 100 performances in HMV last year. I challenged the team that I want 10 times that. I want 1,000 performances. So it’s taking the things that you know people like about what we do and just hyping it up even more. So you know people want vinyl, give them more. Give them as much as they want until they say it’s too much, then let’s back off.”

With all that increase in in-store artist activity, do you think HMV’s network of stores can help break artists?

“Yeah, you’ve got to hit all levels now. Back in the day, [artists] could say, ‘Oh we’ll just do TV or we’ll just tour’. I think now you need a very holistic approach. You’ve got to get on all the streaming sites, of course, you’ve got to tour, you’ve got to play. There’s something just amazing about that intimate experience of being there [in the store] with your artist. So I think we can certainly help to get a lot of people to [gigs]. You’ve got to think of how many millions of people go through our stores. I think it’s certainly a way that we can help. Not only does that give a great in-store experience, but it certainly pays off in the long run to try and help support the community -that is the reason we exist.”

Vinyl growth is slowing in the UK. Can you only grow vinyl at HMV at the expense of indies?

“No, I don’t think so. I think for us it’s about getting new people who are just walking through a mall or the High Street, they see us and the passion of a person in the store and that’s how a lot of people get hooked on getting back into vinyl, buying a record player. There’s something really cool about it, when you actually set it up and use it, it’s hard not to buy an album here and there. I get that the pace of it is slowing but we’ve just got to keep making it easier for the customers to get into it. I think we can develop new customers into it. Frankly, it’s a really great number where it’s at now. If we can just keep being the one place that everyone thinks of for entertainment product, there’s a customer that going to be coming in and buying from us for a long time.”

Can you reverse the decline in CD?

“I think you can slow it. We definitely talk a lot about how much of the decline is almost that self-fulfilling prophecy. If people keep moving away from the CD, meaning the retailers, then of course it’s going to continue to decline. I think what we need to do is just keep giving the assortment, we can definitely slow it down and you’ll hit a point where you’ve got that core customer buying it. It’s no different than if artists only released music digitally. Clearly that’s going to hurt the business as well, so for us it’s about making sure that we try and push as much as possible to make sure that artists are continuing with physical product.”

How’s it going so far with new releases from Tom Walker and the on-going soundtrack success of Bohemian Rhapsody?

“They’re doing great. Look, we picked a good year to get in the business, when you look at what’s come and what’s coming it all looks good for us. But I think that the core thing for us is that as much as you need the new releases, the more analogue business and depth we can do, the safer we are if we don’t have a year with a great slate. There’s no doubt that the bigger the acts that are coming out, the more business we’re going to do. Again, it’s up to us to really offer that experience that makes the customer want to come in and spend time with us, regardless if that new release is there or not.”

Is there anything the industry can do to make the physical product more attractive?

“The more you can offer, the better – and I don’t think it only has to be the music content. The more artists can put in there of themselves, the better, whether it’s images, whether it’s a journal, something about how they made the album, just something that’s only found in that CD. The more you can do that, there’s just that deeper sense of connection with the artist. I think that is what can capture the customer.”

To read the cover feature interview with Putman, pick up the latest issue – or subscribers can click here. To subscribe and never miss a big industy story click here.