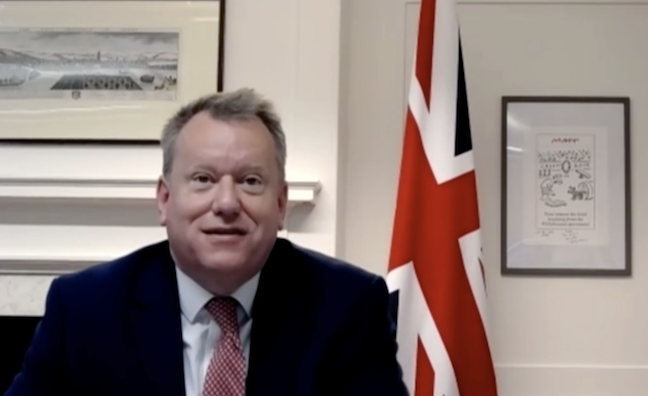 It was third time lucky for the DCMS Committee and Brexit minister Lord Frost.

Having initially refused an invitation in February to appear before MPs to discuss the government’s failure to reach agreement with the EU on visa-free arrangements for creative workers – including touring musicians – he then withdrew from a scheduled appearance last month.

That last minute cancellation prompted a rebuke at the time from DCMS Committee chair Julian Knight, and disappointment from the music industry. During the hearing today, Knight was quick to call for order as Lord Frost suggested he was not responsible and even attempted to get the DCMS minister Caroline Dinenage to answer questions on the progress made with bilateral discussions between the UK and other countries.

“It’s my role to make sure this issue is properly coordinated with all of our other business with the EU,” said Lord Frost. “It's the responsibility of the DCMS to take this forward with our embassies and the engagement on this question has been done by officials from DCMS.”

Labour MP Kevin Brennan suggested Lord Frost’s self-imposed one-hour time limit for the committee was “appalling” (although there was no suggestion this was because of the 5pm kick-off in the Euros). Scottish National Party MP John Nicolson said musicians watching would “not [be] impressed by your performance”.

Cabinet Office Minister Lord Frost negotiated the UK’s EU trade deal at the end of 2020, which it soon emerged did not provide any provision for visa-free touring. That prompted a huge row and a blame game with the EU, which he returned to during the hearing.

“We did put forward proposals which would have very much solved the problem we now face,” he told MPS. “Sadly, the EU wouldn't accept that. That's just the reality of the way these negotiations went.”

However, Lord Frost – and ministers who have previously given evidence – admitted that there were concerns about a visa waiver proposal by the EU for ‘ad hoc’ performances.

In response to a question from Brennan, Lord Frost said: “Free movement was an issue in the referendum, and it was very clear that free movement ends with our exit from the EU. This government fought an election and won an election.”

“We do not agree with permanent visa waivers because they deprive us of control over our immigration system. That's why we put those other [proposals forward] but unfortunately they weren't acceptable. I get that not everyone may agree with the end of free movement and its consequences, but it was the government's policy and that's what we are implementing.”

Despite a previous Culture Minister’s comment that freedom of movement was “absolutely essential” for touring artists, Lord Frost suggested that was mistaken. “Nobody can dictate the outcome of a negotiation that hasn't yet taken place,” he told MPs.

Artists have been campaigning for a solution, including a high-profile intervention from Sir Elton John, who met Lord Frost to make his case. However, the music legend has since described the government as “philistines” over the EU touring issue.

Lord Frost hit back during his committee appearance by pointing out that Elton John’s career pre-dated the UK’s alignment with the then European Economic Community in 1973.

“Our plan of action, as has been set out, is to work with the countries in priority that do not have particularly liberal rules on this subject, and see if we can persuade them to improve them,” he said. “If we could all get together behind achieving that, I think that would be good. I had a good conversation with Elton John, I thought it was helpful to hear directly [from him].

“I can't help noticing that he had his first hits before the UK even became a member of the European Union. So I think there's probably more at play here than pure rules applying within the then European Community. Talent is important and that's why we support our talented creative industries.”

With ministers unable to revisit the trade deal for several years, the focus now is on smoothing the arrangements with each of the 27 EU states on touring for UK artists. The positive news is that DMCS has identified 17 EU members, including France and Germany, where the paperwork and rules are less complicated than feared.

Discussions are ongoing with the other 10 countries, including Spain, with a meeting involving Trade Minister Greg Hands taking place today.

“There at least 17 countries of the 27 where pretty normal or indeed entirely normal travel is possible for the purposes of carrying out performances in normal circumstances,” said Lord Frost. “In practice, there would remain difficulties – I'm not denying that. But it is nevertheless the case that in big countries, like France and Germany, it is possible to travel without visas or work permits.”

However, under questioning, Lord Frost conceded that there were still limits on touring in those 17 countries compared to the period when the UK was an EU member.

The other major issue for touring is the costs imposed for vehicles, and Lord Frost confirmed that the Department for Transport is working on this at EU level rather than with individual members.

“We tried in negotiations to get more generous arrangements for cabotage,” he insisted.

In a surprise move, Lord Frost suggested the music industry could do more to help bring about solutions on visa and permit arrangements for touring artists with EU members.

“I think it would be extremely helpful, if I may say so, if the representative bodies of the industry – musicians, and touring performers more generally – could support us in that, could use their networks and their relationships with similar bodies in other EU member states to encourage those governments to be less restrictive,” he told MPs. “I think we would very much welcome that, I said that to Elton John, in fact, and I will say it to others. I'm sure DCMS are already orchestrating this, but I do want to put it on record that we need that sort of help and support. I am convinced it will make a big difference to help improve the situation.”

During some testy exchanges with MPs, Lord Frost denied the suggestion that the creative sector was not something the Brexit negotiating team and government cared about.

“We fought very hard in the negotiations last year to find a solution that was consistent with the end of free movement as a formal policy, and we are working very hard now to find a way forward as we've set out,” he said. “It is a major priority for us and we hope to be able to deliver some results during this year. But it is a negotiation, it is not in our control. We do the very best we can to achieve results.”

Knight questioned whether the last six months following the trade deal had effectively been wasted, just as touring is set to reopen following the pandemic.

“I don’t think that is a fair conclusion, if I'm honest,” said Lord Frost. “My recollection is that we began the information gathering phase really quite early in 2021. It is extremely complicated to understand properly all the provisions of 27 member states’ visa arrangements, and the interaction with the work permits and the economic test schemes – that is simply a extremely complicated task.

“I think we did it very well considering the broader circumstances, we have now assessed the situation and we see that there are some areas that are problematic, and some perhaps less so. That's what we are tackling, so I don’t agree that that time was not well used.”

However, the music industry trade bodies that Lord Frost was trying to rally to his cause were not impressed.

The #LetTheMusicMove campaign, instigated by the FAC and MMF with support from artists, said: "Today's select committee session will do little to soothe the growing concerns of the UK's artists, musicians and live music businesses. While we continue to suffer the catastrophic impacts of Covid, many are now in open despair at the government's disturbing lack of urgency to address a range of Brexit-related bureaucracy and costs that will make EU touring almost prohibitively expensive and burdensome.

“Despite being told by the Prime Minister in March that Lord Frost was dealing with these issues and would ‘fix it’, we’re still left with only crumbs of additional information and absolutely no update on the kind of transitional support package that will be vital for music businesses to operate in the short-term. To put this in context, the UK's £1bn fishing industry has received £23m to adjust to new red tape. As it stands, our £6bn world beating music industry is being hung out to dry. It feels like a complete abdication of responsibility."