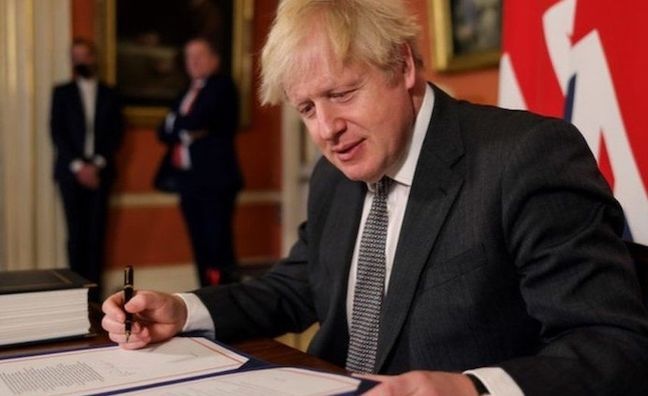 Last month, Music Week revealed the huge concerns about touring artists and musicians in the post-Brexit trade deal with the EU.

In the latest development, trade bodies have reacted furiously to a report that the UK government rejected an offer of visa-free touring in EU countries for musicians.

The report in the Independent suggested that the “standard” proposal to exempt performers from the huge cost and bureaucracy for 90 days was turned down by the UK government, because it is denying that right to acts from the EU.

Just days ago, the BBC quoted a government spokesperson who claimed that Brussels was to blame for the lack of agreement. According to the Independent, however, the UK requested a 30-day exemption for performers – in line with immigration rules set by Home Secretary Priti Patel – but rejected an EU proposal for 90 days.

The Incorporated Society of Musicians has called for the government to make an urgent statement in the House of Commons on the claims that the government rejected the offer of 90 days visa-free touring.

“The ISM and the rest of the music sector are appalled by shocking reports that the UK government rejected an offer from the EU to waive bureaucratic work permits for British touring musicians, in direct contrast to statements made by ministers in Parliament last week,” said CEO Deborah Annetts.

“If these reports are true then we are looking at a serious breach of trust after the government provided multiple assurances throughout 2020 that they understood the importance of frictionless travel for UK musicians and would be negotiating an ambitious agreement to achieve this objective.”

A petition was launched last month calling for visa-free access to the EU for 90 days across the cultural sector, backed by artists including Laura Marling, Ronan Keating and Tim Burgess.

Without an EU agreement on touring as part of a trade deal, it is now up to each member state to decide on whether to demand visas for artists up to 90 days.

The Musicians’ Union is demanding that the Culture Minister confirms whether it was the UK government that blocked the deal, which would have avoided costly admin and bureaucracy four musicians and artists.

Horace Trubridge, MU general secretary, said: “With the British music business having been devastated by Covid-19 and with no end in sight to the black hole of cancelled concerts, tours, festivals and regular gigs that is the very bedrock of our world-class industry, the news, if true, that our own elected representatives chose to turn down such an offer is nigh-on unbelievable. Ever since the result of the referendum in 2016, the MU has campaigned and lobbied for a Musicians’ Passport that would allow our members and their support crew to make a successful living across Europe.

“This campaign has been backed by all sides of the industry and current petitions, signed by hundreds of thousands of musicians, industry workers and supporters, illustrate just how vital the freedom of economic movement is to our industry worth £5.8bn to the UK. Negotiators on both sides should continue to acknowledge the importance of cultural life and its huge social and economic value by finding an acceptable solution.”

The Music Managers Forum drew attention to assurances a year ago by Priti Patel that touring routes would not be affected by her immigration rules. Last year even the pro-Brexit minister responsible for music said that free movement for artists was “absolutely essential”.

MMF CEO Annabella Coldrick said: "Last February, the Home Secretary stood up in the House of Commons and claimed that the situation for British musicians touring Europe would be completely unchanged, and that touring routes would operate as they do now. A year on, and such assurances appear to be misplaced and, if recent newspaper reports are true, as a result of intransigence on the part of the UK government.

"This is utter insanity. Music is at the heart of Britain’s national culture, and a sector where we are genuinely world beating. For the sake of our artists, our musicians, and the tens of thousands of people who work in live music, we need urgent clarity from ministers as to what is going on and an immediate commitment to resolve the situation to avoid a serious impact on our ability to tour the EU post-Covid."

In a House of Lords debate on Friday, Cabinet Officer minister Lord True outlined the government’s negotiating position with the EU.

He said: “The UK proposed measures that would have allowed musicians to travel and perform in the UK and the EU more easily, without needing work permits. Specifically, we proposed including the work done by musicians, artists and entertainers, and their accompanying staff, in the list of permitted activities for short-term visitors.

“In practice, this would have delivered an outcome closer to the UK’s approach to incoming musicians, artists and entertainers, but these proposals were, sadly, rejected by the EU.”

Greg Parmley, CEO, Live, said: “The live music industry is already facing a catastrophic situation due to the Covid shutdown. LIVE is calling on the Government to give urgent clarification as to what was offered by the EU to enable visa-free tours by UK artists and crew. All parties need to work quickly to ensure that once Covid restrictions are lifted UK artists are able to work across the EU with the same freedom that has been secured for people doing other business activity.”

The reaction of trade bodies to the touring confusion comes amid wider concerns about the Brexit deal.

“We join the call with leading UK businesses that trade negotiations with Brussels should restart to address the serious regulatory challenges facing many industries, and a better deal for UK musicians should be included in those talks,” said ISM CEO Deborah Annetts. “We need complete transparency on what was discussed during the negotiations and an urgent statement in the House of Commons outlining what steps the government are taking to protect our world leading performing arts sector.”