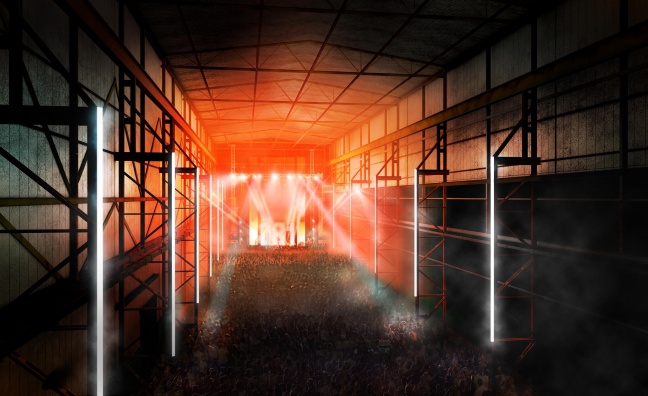 Broadwick Venues' new event space The Drumsheds is to launch for Field Day from June 7-8.

The former BOC gasworks at Meridian Water in Enfield is located next to Tottenham Marshes and promises to "break the mould" of traditional London venues.

"The Drumsheds is Broadwick Venues' most ambitious project to date and a huge boost for the capital; multiple warehouse spaces, the largest of which has 10,000 plus capacity, along with a 10-acre outdoor festival space," said MD Bradley Thompson. "It epitomises both Broadwick Venues' dedication to quality, innovation and creativity, and Meridian Water's commitment to be a true 24-hour destination. We’re confident that people will be as blown away by it as we are.”

Amy Lame, London’s Night Czar, said: “I’m delighted that The Drumsheds is the latest venue to open in our capital and proud that it shows Enfield’s commitment to delivering the Mayor’s 24-hour vision for London. London has the most diverse night-time culture in the world and this innovative new event space, at the heart of a major regeneration project, will be a great addition to our wide range of entertainment venues.”

The scheme has been developed in partnership with Enfield and Meridian Water, the UK’s largest regeneration project – a £6 billion investment. A new Network Rail Overground station - Meridian Water - launches in May and is just a five-minute walk to The Drumsheds.

Launching the venue, Field Day will host the likes of Skepta, Jorja Smith, Bonobo, Jungle, Modeselekor, The Black Madonna and Todd Terje amongst the first to perform at the groundbreaking new space.

Details of The Drumsheds' 2019 schedule will be revealed later this year.