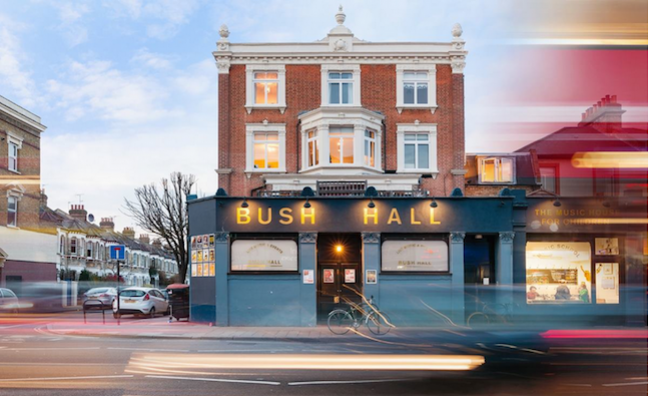 Dice has announced a deal to become the exclusive ticketing partner for Bush Hall.

The Dice platform locks tickets to smartphones to effectively eliminate ticket touting and ensure fans get in at a fair price.

Bush Hall will benefit from the platform’s capabilities as a marketing tool as its slate of live music events are promoted to even more engaged fans in London and further afield.

Following a full restoration, Bush Hall launched as a gig venue in 2001 with a capacity of 425. It has since become one of London’s most well-loved venues, famous for its original period features, including crystal chandeliers and ornate cornices.

In the 20 years since its inception as a gig venue, Bush Hall has staged breakthrough performances from the likes of Amy Winehouse and Adele, in addition to hosting huge acts including Alicia Keys, REM and The Killers. The venue was recently a beneficiary in the latest round of the DCMS Culture Recovery Fund.

Betsy Harley, music booker and events manager at Bush Hall, said: "We are so excited for our new partnership with Dice. We have watched the company grow from strength to strength over the years, and seen how they adapted to the new ‘normal’. As have we all. This year we celebrate our 20th anniversary, so have lots to look forward to. Keep your eyes peeled and spirits high!”

Andrew Foggin, global head of music at Dice, said: “This historic venue is full of character - every gig feels special at Bush Hall. And the programming is exceptional, there’s so much for fans to discover.”

Foggin added: “We want to help make sure the return to live for these well loved venues is as successful as possible. By partnering with Dice, their live events will be promoted to even more fans, meaning more sell out shows.”