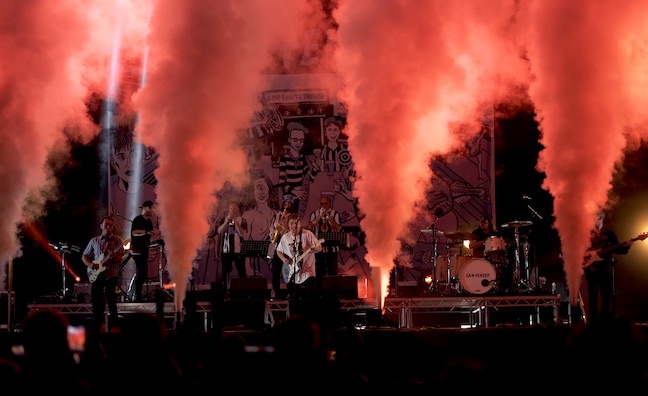 Fender, whose second LP Seventeen Going Under is heading for No.1 this week, has been making up for lost time on the touring circuit in recent weeks, playing a run of festival slots and headline shows including his long-delayed bow at O2 Academy Brixton.

His rescheduled maiden arena shows follow in November - dates originally planned in support of his 2019 debut album Hypersonic Missiles before the pandemic intervened - with a full-scale UK arena tour to follow next spring.

“Covid has been difficult for everybody, but it has been super-difficult for Sam because he was on such a trajectory. Last year was going to see him play his arena run in March/April, leading into a big festival season, which all got taken away. So we’ve had to plan and re-plan to try and figure out where we were going.”

Indeed, 2019 BRITs Critics' Choice winner Fender has found himself in the unusual position of dropping his second LP before completing his first album tour.

“I don’t think we’ve ever had a situation like this,” remarked Wilson. “We had 80,000 tickets in the market for shows that he couldn’t play, but nobody wanted refunds. A lot of people have still never seen him live, so I said, ‘If you can get the new record out ahead of these shows, that is going to make them special.’ Not only are people wanting to see Sam because of his first album, they’re hearing the new record all over the radio, too.

“I think he can be doing big, open-air shows next summer, but we can also take this around the world. Sam is very much an international artist.”

Speaking in the latest issue of Music Week, Fender reiterated his hopes of headlining St James’ Park, home of his beloved Newcastle United (“If I get that done, I’ll be pretty fucking happy with myself,” he said). Wilson said it was an achievable goal.

"He definitely can," asserted Wilson. "I mean, he wanted to play it [earlier in his career] and we said, 'Just hold on a little bit, let's do the steps.' But yes, he's a genuine festival headliner and he's made to play those open air shows. His audience is a mix of ages and that is quite rare. You have the indie rock kids who are into artists like Liam Gallagher and Gerry Cinnamon, but he also brings in the Springsteen fans who are drawn in by the energy and excitement of a Sam Fender show.

"Sam still feels very young and exciting to exciting to everybody. We're not seeing any dip in excitement or demand, and having some new music out has just spurred that on."

Wilson also discussed Fender's two nights at the socially distanced Virgin Money Unity Arena in Newcastle in the summer of 2020.

“We were wary, because at that point there were lots of people with Sam Fender tickets for shows that had been rescheduled over and over and we were a bit nervous of putting new dates on sale,” he said. “But we saw the concept and it looked unlikely there were going to be any other gigs last summer, so we thought, ‘OK, it’s his hometown, let’s do it.’ And it was a really good experience.

"Those shows got worldwide attention and I still get people asking about Sam from various parts of the world now because of it. I think they also helped him put this new record together, because they gave him a chance to play a couple of new songs in front of an audience.”

Click here to read the full interview with Fender and his team.