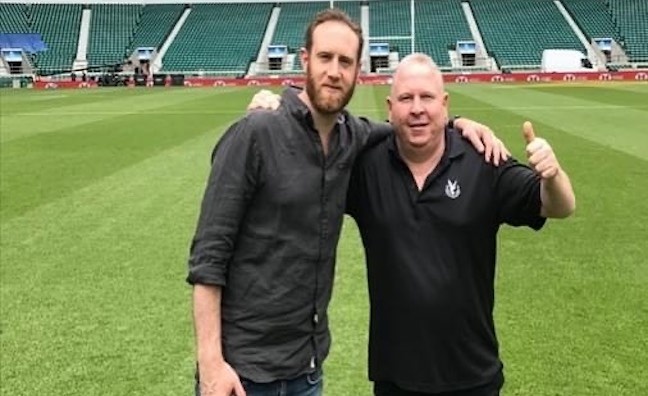 Tributes have flooded in for much-loved X-ray Touring agent Steve Strange, who has died aged 53 following a short illness.

One of the biggest characters in the live business, Strange (pictured, right) represented a roster of artists including Coldplay, Eminem, Snow Patrol, Queens Of The Stone Age, Ash, Jimmy Eat World, The Charlatans and Eagles Of Death Metal.

Starting out as a drummer with Belfast band No Hot Ashes, the Northern Irishman's agency career began more than 30 years ago at Bron and led to stints with Prestige Artists, FAB Agency and Solo, among others, along with a short spell as a promoter back in Ireland with MCD/Wonderland, and a booker for Belfast's Limelight venue. He joined Helter Skelter in 1997 before co-founding X-ray in 2005 with fellow agents Ian Huffam, Scott Thomas, Jeff Craft and Martin Horne.

"We have lost a legendary figure in our personal and professional lives that we will all deeply miss," said a statement from X-ray Touring. Steve was a unique individual within our industry, his overwhelming love of music led to a 30 year-plus career guiding the touring of an eclectic mix of artists from all genres of music that he adored.

"A universally known, hugely respected and loved character - if you hadn't seen him at a gig or festival, you'd most certainly hear his infectious and infamous laugh.

"Steve had the best ears in the agency business, signing and developing the careers of countless world class artists from small club venues to vast international multi-stadium tours. He will always be remembered with love by his friends and colleagues at X-ray and the world over."

Strange worked with Coldplay from their formative shows, telling Music Week in 2016: “They literally were still talking to labels at that point. Even back then, Chris [Martin] had a very special, unique personality. You can tell how great those songs are and you can see a lot of him as a character within those songs.”

Coldplay tweeted: "We are devastated by news of our dear friend Steve Strange's passing. A giant of the music industry and the cornerstone for so many bands' and artists' careers, including ours. Never afraid to talk straight and fight for his artists, you always heard him before you saw him and you knew you were in for a good evening.

"We spent a bittersweet hour with him last week. Despite his illness, he was still taking calls and watching ticket counts. We send all our love to Steve's friends and family and his colleagues at X-ray. We will miss you dear Steve, no doubt you are at The Aftershow to end them all..."

Between 2002 and 2016, Strange booked Coldplay to headline Glastonbury a record four times.

"He was always so kind to us here at Glastonbury and a lovely man to deal with," said festival co-organiser Emily Eavis on Twitter. "We will miss you sir and your infectious laugh."

Artists and executives rushed to pay tribute on social media. CAA UK co-head Emma Banks wrote: "Steve Strange - a truly good and loving person without a bad bone in his body. The life and soul of every occasion, a music man to the core and dedicated to his clients, friends and family. If you knew him you will understand why eveeryone is devastated by his passing and if you didn't know him, you missed out big time."

Neil Warnock MBE, head of worldwide touring for UTA, said: “I can’t believe we have lost Steve Strange. He was an absolute icon in the world of music. He was a fan of all music genres who was at the top of his game. I’ve lost a true friend and the industry has lost a larger-than-life character."

LIVE CEO and International Live Music Conference (ILMC) MD Greg Parmley eulogised "one of the true legends of the live music business". "So sudden, so young and such an enormous loss," he said.

Strange was also agent for Gomez for  24 years. The band's Tom Gray, founder of the #BrokenRecord campaign, said on Twitter: "He had a fierce, ridiculous love of music. He was always happy to be as silly as us and he didn't fucking care. He was always in the moment with us. Everything in our industry so often is not. We all loved him.

"Steve is one of the choir voices singing on the chorus of Get Myself Arrested. That was the day we met him and, as a result, the day he became our agent."

AEG Presents SVP of international touring Simon Jones remembered: "Steve Strange gave me my first ever gig... Devastatingly sad that he has gone. What an absolute giant of the industry and such a colossal gent."

Music Venue Trust CEO Mark Davyd said: "A massive part of my personal history in live music, one of the first people in our industry I ever got to know as a real person and a friend. Words are inadequate to describe a force of human nature like Steve."

Ash wrote: "Our hearts are broken. Agent extraordinaire. The heart of a lion. Straight outta Carrick, he changed this business forever. Our force. Our constant source. Our shining light."

Bestival founder Rob Da Bank said: "Incredible agent for so many from Eminem and Coldplay but always seeking out new exciting bands. The best laugh in the biz just left the room."

SJM Concerts promoter Chris Wareing wrote: "What a guy. He will be very sorely missed by all."

"Rest in the music dear Steve Strange," added Garbage. "Fine promoter and a great friend to musicians around the world."

Ed Sheeran also paid tribute on Instagram, saying it was "a very sad day and a huge loss".

So sad to hear the news about music agent and industry legend Steve Strange passing. He was always so kind to us here at Glastonbury and a lovely man to deal with. We will miss you sir and your infectious laugh.

Our hearts are broken. Goodnight Mr. Steve Strange. Agent extraodinaire. The heart of a lion. Straight outta Carrick, he changed this business forever. Our force. Our constant source. Our Shining Light. Miss you like crazy Strangey. pic.twitter.com/1MKZ1O2Gt9

Steve Strange, our agent of 24 years has died.

He had a fierce, ridiculous love of music.

He was always happy to be as silly as us and he didn’t fucking care.

He was always in the moment with us.

Everything our industry so often is not.

We all loved him.

Rest in the music dear Steve Strange. Fine promoter and a great friend to musicians around the globe. You will be missed sir.

Absolutely heartbreaking news about Steve Strange. Our agent, our friend and one of life’s most gloriously upbeat people. You will be missed, celebrated and remembered so fondly. Goodnight big man x x pic.twitter.com/NVgXX8hVJp

We are truly saddened to hear the news of our friend and agent Steve Strange. Steve signed us to his roster at X-Ray touring before we had even played a show as kodaline and since then has helped guide and shape our live career. pic.twitter.com/9Paa4ATpgz

Terrible news about Steve Strange, can’t quite believe it. A massive part of my personal history in live music, one of the first people in our industry I ever got to know as a real person and a friend. Words are inadequate to describe a force of human nature like Steve.

So sad to be waking up to the news about Steve Strange. He was such a character and a legend within the industry. Sending love to all those who knew him and worked with him and especially to his family

Terribly sad today to hear that Steve Strange has left the planet… incredible agent for so many from Eminem and Coldplay but always seeking out new exciting bands. The best laugh in the biz just left the room ???? pic.twitter.com/PimBmw7xa8

A Boss, A Idol, A Friend, A Inspiration and one of the kindest people ive ever met - absolutely devastated - love you Steve - RIP pic.twitter.com/2xXMziQMdB