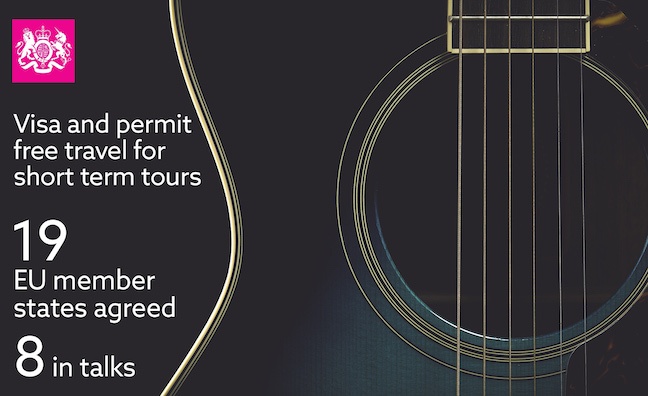 Following a series of parliamentary committee hearings, and high-profile interventions by major artists such as Elton John, ministers are confident about the agreements secured with 19 countries.

With touring artists not covered by the EU trade deal, ministers have been involved in diplomatic negotiations on a bilateral basis. MPs have so far been largely unimpressed by the lack of progress over the last several months to address the visa and permit restrictions imposed by different countries.

“We want the UK’s fantastic performers and other creative professionals to be able to tour abroad easily,” said a government spokesperson. “That is why we tabled ambitious proposals during negotiations with the EU. Our recent trade deal with the three EFTA countries was based on the same offer, and shows it is workable.

"We, as government, have spoken to every EU member state about the issues facing our creative and cultural industries when looking to tour in Europe. From these discussions 19 member states have confirmed UK musicians and performers do not need visas or work permits for short-term tours.”

In June, the government said 17 out of 27 countries were open to touring for UK acts, although admitted that “difficulties” would remain. Limits would still be in place compared to the previous freedoms available with EU membership.

The government has committed to continuing negotiations.

“We are now actively engaging with the remaining EU member states that do not allow visa and permit free touring, and calling on them to align their arrangements with the UK’s generous rules, which allow touring performers and support staff to come to the UK for up to three months without a visa,” added the government statement. “Formal approaches via officials and DCMS Ministers have been made to Spain, Croatia, Greece, Portugal, Bulgaria, Romania, Malta and Cyprus. We are also working with the sector to amplify each other’s lobbying efforts.

“We recognise challenges remain around touring, and we are continuing to work closely with the industry. We want to ensure that when Covid-19 restrictions are lifted, touring can resume and our world-leading creative and cultural artists can continue to travel widely, learning their craft, growing their audiences and showing the best of British creativity to the world.”

There continue to be major issues around cabotage, the restrictions imposed on UK hauliers supporting tours.

Artist representatives and trade bodies have yet to welcome the government's latest announcement.

"We continue to co-operate in good faith with government and officials on the critical issue of EU touring, however the latest announcement is nothing more than we already knew,” said FAC CEO David Martin. “It remains that the UK's music industry is in a far less advantageous position now than it was pre-January.

“Despite the spin, this statement represents an admission of failure. Failure to fulfil the promises made by government about securing our industry's future during negotiations, failure to ‘fix’ the issue, as per the PM's statement of March this year, and failure to provide certainty around touring in almost a third of EU countries, eight months after the music industry was dealt a no-deal scenario. “

The FAC  launched #LetTheMusicMove in June, which saw thousands of artists sign up to highlight the EU touring crisis.

“If there is a serious intention to fix the problems created by the government's failure in negotiations, they must start by being honest with our sector and the public about the current status regarding EU touring,” added Martin. “As a start, government must publish full details on a country-by-country basis, outlining the exact requirements for touring performers and crew across all 27 member states."

He said: “For months, UK Music has been pressuring government to resolve the EU touring crisis. So, it is welcome that progress is starting to be made on this issue and negotiations are happening at ministerial level. It’s vital that the government maintains its focus and works to remove the practical barriers currently impacting musicians who need to work across the EU - particularly in the eight member states which ARE requiring permits and visas, and on the EU-wide cabotage issues facing industry.

“It’s also important government works with member states to develop clear guidance on the countries where touring is possible so that musicians & crews have a clear understanding of what the different rules are & what will be required from them. For example, what is covered by 'short term'? All in all this is encouraging. But there is still lots of work to be done, and we will continue to pressure the government to resolve the many issues facing our industry when it comes to working and touring in Europe.”

Elton John posted on social media that there “needs to be far more clarity on exactly what progress has been made”.

Read my thoughts on the recent announcement from @dcms ???? pic.twitter.com/auWJ2eMI3v

The Musicians’ Union (MU) gave a cautious welcome to the announcement but noted that the list of 19 countries does not include Spain, where UK musicians are having major issues with touring. It also called for more detail to determine how much has changed.

Horace Trubridge, MU general secretary, said: “There remains a number of very significant, outstanding issues and this announcement fails to account for many of the problems currently facing musicians touring in the EU. In fact, it remains unclear as to whether this is a result of recent negotiations or simply a clarification of measures that have been in place for some time. The MU has been pushing the government to negotiate with member states to avoid the need for work permits and remove the barriers that currently exist around cabotage, customs and transport. Whilst this progress is welcome, there is still a lot of work to be done.”

Dave Webster, MU national organiser for live performance, said: “Before we can be sure this is a positive development, we need to study the detail and be certain as to what this announcement means for musicians. There are also still major problems in countries like Spain, and with issues like carnets, merchandise, cabotage and splitter vans also causing difficulties, we will continue to push the government to do more to sort these out.”

The Union continues to work on further guidance for its members. It will continue to monitor how discussions are progressing with other countries and look to contribute to them in the future.

Greg Parmley, CEO of LIVE, said: “While we are grateful to the government for clarifying the pre-existing arrangements on travel to a number of EU countries – something that we as an industry have been untangling ourselves for some time now – there is nothing new in their latest announcement and we are still some way from visa-free travel in the EU.

“There are no new ‘frictionless’ agreements and in reality, this is only a very small piece in a much bigger touring puzzle, and substantial financial and bureaucratic barriers remain that disproportionately disadvantage smaller and emerging artists. We fully support the government's ongoing negotiations, but until then they must introduce a Transitional Support Package, to safeguard the future of the live music industry while we wait for their ‘ambitious proposals’ to be realised.”

Deborah Annetts, chief executive of the ISM, said: “Our touring musicians deserve better than misleading statements from government, when many have serious concerns for their future careers and livelihoods. We believe that pursuing a Visa Waiver Agreement with the EU remains a critical part of the solution, enabling artists to tour in Europe with ease once more, something that is vital for many musicians in order to make a living.

"We have been disappointed that the Government has so far refused to open discussions with the EU, which harms not just the UK creative industries but also the UK economy. The legal advice we have obtained dismantles the Secretary of State’s reasons for not pursuing a VWA with the EU."

Tim Brennan, Carry on Touring founder and petition creator, said: "The spin which the DCMS is putting on announcements, claiming existing third country rules have been won in negotiations, are only adding to the confusion of what used to be simple.

"Equally, the rules for EU nationals working in the UK are being further confused by the DCMS deliberately creating confusion between rules for professionals working and amateur performances."