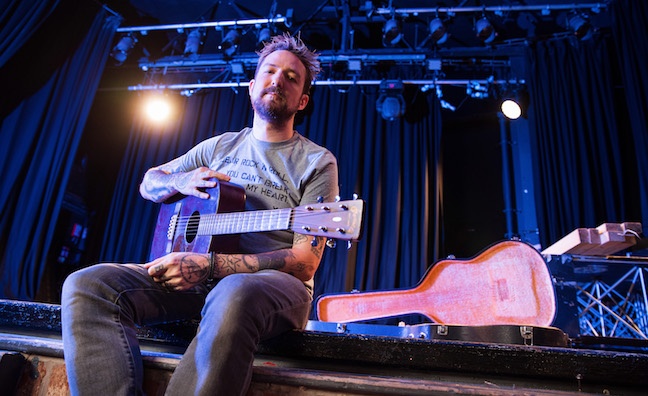 Frank Turner has told Music Week that socially distanced live gigs are a "step in the right direction" as the folk-punk hero prepares to return to the stage for a pilot show at The Grand in Clapham tonight.

Indoor venues closed since the Covid-19 shutdown in March have been told they will be allowed to reopen at reduced capacity from August 1.

DCMS is working with the sector on pilots of performances with socially distanced audiences that will inform final guidance for venues in the run up to the restart date, and Turner, the public face of the Music Venue Trust's Save Our Venues campaign, is eager to play his part.

“We can’t just launch straight back into how things were in early March, it’s going to be a long, drawn-out process and these shows are the first step on that road,” said Turner, who stars on the cover of this week's issue. “It’s a way of demonstrating both to audiences and to venues and indeed to the government that it is possible to do this in a way that is safe for everybody involved.

“I have figured out I’ve spent the last 20 years making a living out of travelling and gathering people together in confined spaces – neither of which are encouraged at the moment – so obviously there is a great hunger for people to get back to live music. The entire industry is reeling from lockdown. The last four months have been catastrophic and people can’t exist running on fumes forever.”

The simple fact of being in a venue again nearly made me cry. It felt like coming home

Since lockdown began, the former Million Dead frontman has raised close to £200,000 for small venues through his Independent Venue Love (IVL) livestream gigs – most of which were filmed in his living room.

“I did 16 livestream shows – mostly for independent venues – from my house during lockdown and we raised just shy of £200,000, which I feel pretty good about,” said Turner. “But at the end of the day, playing to the back of your phone over and over again is not a gig. I had my wonderful wife and cat in the room every time, but it’s not quite the same as playing in a venue.”

Turner headlined Save The Grand at an empty Clapham Grand on June 25 – the first of the IVL series to take place in an actual music venue, and Turner said he was looking forward to getting back in front of a live crowd.

“There was no audience, but the simple fact of being in a venue again nearly made me cry,” said Turner. “It felt like coming home and it was incredibly moving just being on a stage, being in the place where I've made my living, my home and my name for the last 20 years – and I can’t wait to go back.”

Morning all. Exciting week - doing a government pilot show at @TheGrandClapham tomorrow night. Will be weird, for sure, but hopefully a step in the right direction.

Tickets for tonight's reduced capacity show at the 1,250-cap venue were offered to people who donated to the original fundraiser. Turner is reuniting with his band, The Sleeping Souls, for another livestream on August 9, which will mark his 2,500th show.