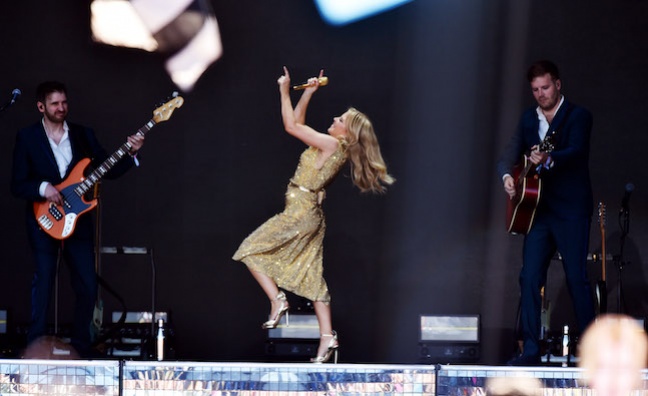 The Glastonbury legends’ slot has taken on a life of its own. The Sunday afternoon fixture has become almost as anticipated as the headline artists, gaining in prominence over the last two decades.

The enormous crowds that greeted Dolly Parton and Lionel Richie’s appearances from 2014-15 set a new standard, leaving this year’s star, Kylie Minogue, with a near impossible act to follow.

Yet follow it she does. A large audience was to be expected, but the mass of humanity that greets her arrival on the Pyramid Stage – right up there with Dolly and Lionel – is a sight to behold. “Just so you know I’ve never seen so many people in all my life,” she hollers, disbelievingly.

Minogue, is an established draw at arena level, but the novelty of seeing her at Worthy Farm elevates her to a whole new echelon. Kicking off with 2002’s Love At First Sight, the singer embraces her fun side on early hits I Should Be So Lucky and Hand On Your Heart.

Fellow Aussie Nick Cave joins her for a lovely run through their 1995 duet, Where The Wild Roses Grow, returning the favour from his All Points East set last year, but Minogue goes solo on the Robbie Williams collab, Kids.

Kylie, of course, has unfinished business at Glastonbury, having pulled out of a scheduled 2005 headline gig after being diagnosed with cancer. Recalling the period, she becomes emotional prior to welcoming a special guest, Chris Martin. Making his second understated Pyramid Stage cameo in as many days, much to the amusement of social media satirists (Martin also played piano during Stormzy’s headline set), the Coldplay frontman takes guitar duties on one of the first truly great pop songs of the 21st century, Can’t Get You Out Of My Head.

The 51-year-old’s willingness to embrace songs now very much of their time like Especially For You (sadly lacking Jason Donovan), Better The Devil You Know and The Loco-Motion are part of what has endeared her to her adopted nation for 30 years. The 70-minute set lacks the gravitas to be ranked alongside the classic legends’ slots gone by, but few will have put as many smiles on faces.

Over on the Other Stage later in the afternoon, meanwhile, was a female star at a very different stage of her career. Entrenched in the Top 10 with her debut album, When We All Fall Asleep, Where Do We Go?, the precocious 17-year-old American Billie Eilish is not daunted in the slightest by the large, predominantly young crowd. From the opening Bad Guy to the closing Bury A Friend, Eilish is completely in command in her first ever UK festival appearance. Give it 40 years and she might be back to do the legends’ slot…