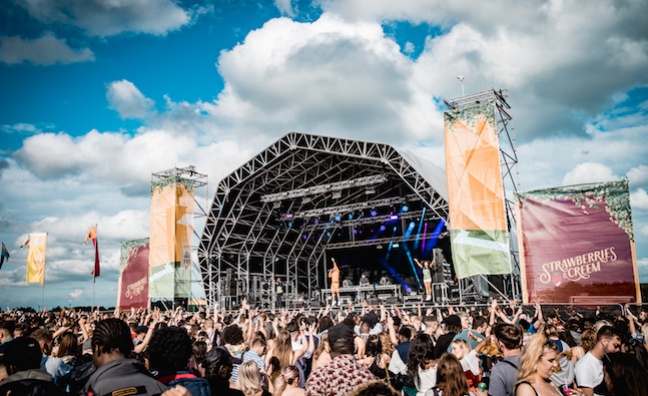 Strawberries & Creem festival has completed its 2021 line-up with an array of artists across Afrobeats, hip-hop, R&B, house and drum & bass – as well as announcing an historic partnership for the UK festival scene with Notting Hill Carnival.

The festival, which was recently acquired by Senbla, is staged in Cambridge on September 18-19.

Joining the main stage line-up is UK rap star Giggs, along with Mercury-nominated Little Simz who will play tracks from her highly anticipated upcoming album Sometimes I Might Be Introvert, dropping just before the festival. Little Simz is Music Week’s cover star for our latest issue.

For the first time ever, Notting Hill Carnival will travel from West London to the fields of Cambridge as it partners with Strawberries & Creem. The carnival takes over the main stage on Sunday. The carnival transformation will include steel drum bands, DJs and a Soca artist.

Preye Crooks, co-founder of Strawberries & Creem, said: “As an event and institution that has been a mainstay in the lives, diaries and cultures of so many of our team and attendees, it has long been a dream of ours to work with Notting Hill Carnival. NHC and their team embody all that our ‘Celebrate Heritage’ tagline represents, and when we heard the sad news of their postponement this year, we felt there would be no better way than to celebrate the influence NHC has had on all of us than by collaborating with them. We’re absolutely delighted this year to be bringing the Carnival flavour and spirit to Cambridge, and it will beautifully accompany many of the Caribbean artists already playing at the festival, such as Koffee. It’s a festival first and something we are incredibly excited about.”

UN Women UK and S&C have partnered on the Safe Spaces Now initiative to tackle harassment faced by women and marginalised genders at live events. An open letter signed by Anne Marie, MNEK, Mabel and more calls for sector-wide change – and S&C 2021 is the pilot event, implementing new safety measures for its festival goers.

S&C have also worked with Girls I Rate and Keychange to curate a diverse and gender-balanced 2021 line-up, with over 50% female performers.