Live execs on the future of the Spice Girls 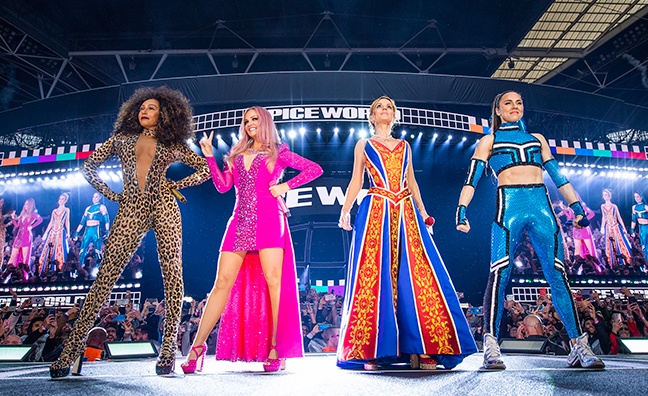 Future live dates by the Spice Girls are an "ongoing conversation", according to execs involved in the group's hugely successful reunion.

The legendary girl group invited speculation about additional activity by re-signing with CAA for representation in all areas worldwide.

However, Modest! Management’s Richard Griffiths and Harry Magee, who were drafted in to represent the band alongside original Spice Girls manager Simon Fuller of XIX Entertainment, told Music Week nothing was set in stone.

“Our deal with them was just to do one tour," said Griffiths. "There’s been a huge amount of interest from absolutely everywhere. But getting the timing right for them to do something again, that will take some juggling around to make that happen because they all have their ongoing things that they were doing before, and young families. Going away to America for two months doesn’t necessarily work for everybody.

“But as we sit here now, whether we’d be working with them again, whether they themselves would be working again, none of us know.”

Whether it will happen again, I don't know. But it was a magic moment

Despite the absence of founder member Victoria Beckham, the on-sale for the 2019 UK stadium tour shattered previous records to become Ticketmaster's busiest ever. Pollstar reported that a total of 695,660 tickets were sold for the tour, promoted by SJM Concerts, Live Nation and Solo, which grossed $78.2 million (£59.5m) from 13 shows.

“Whether it will happen again, I don’t know,” said Solo MD John Giddings, speaking in Music Week's special end of year issue. “But it was a magic moment.”

"I’m not sure we have ever seen demand backed up so high on the ticket platforms for an event here before," said James Taylor, the national stadium’s senior commercial manager. "Demand was there for more shows if they wanted it. The girl power message still remains current and relevant to many and you could see on the show days fans reliving their youth – and many bringing along their own kids to give them a taste of their parents’ youth!

"The production looked amazing, the sound was great and by the time the girls got to Wembley they had obviously done multiple shows so had time to perfect the show before they got to us. They all still sound great live so there was nothing but positive memories from the shows here.

"The final night was particularly emotional as the girls clearly didn’t want to leave the stage. They certainly didn’t leave the stadium until the early hours on the final night! It seemed like the Wembley shows were important for their family and friends and I could see some getting quite emotional in the area they were seated in. I hope the girls and their families left with lasting memories."