Niall Horan on the livestream victory for his touring crew 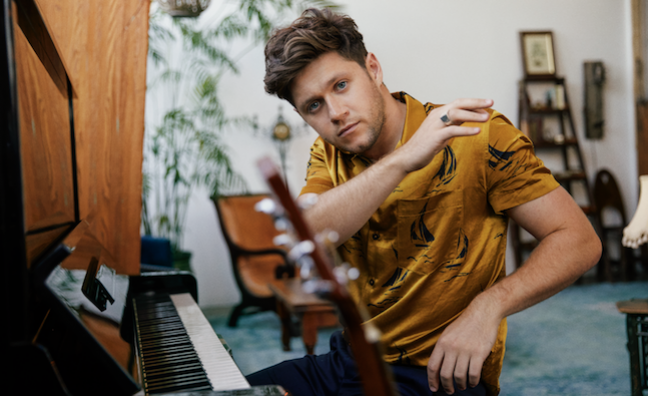 On November 7 Niall Horan performed a livestream gig to an empty Royal Albert Hall to raise funds for his touring crew and the We Need Crew fund. But across the globe fans from 151 countries tuned in to watch the Nice To Meet Ya singer perform his No.1 album Heartbreak Weather live for the first time.

This week, Driift revealed that the event sold more than 125,000 tickets, surpassing the capacity of London’s biggest gig venues the O2 and Wembley Stadium.

Speaking to Music Week on the success, Modest! Management partner, Will Bloomfield said: “We are obviously elated, not only for that endorsement of so many people wanting to see Niall, but for the money made for this cause." Modest! Management are hopeful that this will bring light to the issue and encourage others to do the same, "We all need more artists to bang the drum louder," said Bloomfield.

Horan caught up with Music Week to reflect on the worldwide success of the event, as well as securing a No.1 album during the music biz’s most tumultuous year.

How does it feel to know you have helped your touring crew and the We Need Crew fund with this event?

Niall Horan: "Oh it's absolutely mad. When I put the idea together I didn't think that we were going to get that many people, but it turns out that it's 125,000 tickets but they reckon its between two and three people per ticket, which is a joke, right? There'll be 400,000 people there before you know it. It was just amazing. It was good to know that obviously the bigger the number the more money it means we’ve raised, and we can pay our crew and pay the We Need Crew fund. There was a glint in everyone's eye the other night and it was it was nice to see."

Have your crew spoken to you about how this will help them?

"People were more talking about the mental [health] side of it and how they were just happy to be back at work and how bored they'd been. I don't think people want to talk about [money], I mean obviously people are not going to start mentioning money. It's not one of those things that you talk about on a daily basis but it was more of the idea of like, ‘Jesus its good to be back doing what we actually do.'"

What was it like to perform to an empty Royal Albert Hall but know that so many people were watching?

"Oh, yeah, it was a joke! [laughs] We'd spent a couple of days in there rehearsing for it and honestly there wasn't one time I walked out into the main room, and didn't think, ‘Jesus Christ this looks unbelievable.’ Luckily we had one of the best directors in the world and some of the best camera crew around. But we could have shot it on an iPhone and made that room look unbelievable. It's just the most beautiful room, and Emma Bull who did all the lighting and Paul Dugdale who did all the directing made it look even better than it normally does. It was just really cool. As far as virtual gigs go I don't think it can get too much better than the Royal Albert Hall as your backdrop. We rehearsed there and didn't think anything of it. And then it was kind of like that red light thing, where the red lights go on, on the camera, and you know you're live. The nerves hit after one or two songs and I started freezing up a little bit [laughs] because you can nearly see the faces of 120,000 people in front of the camera. It was quite scary for a few songs. But it was all good and we all really enjoyed it in the end."

What do you hope the government will do to help the live industry going forward?

"Last year, live music in this country was a 4.5 billion industry, if not more. I just don't understand how you can be the engine room, but literally the people who throw the coals in are being left behind. Even when I was just about to pick the Royal Albert Hall, they were saying the Royal Albert Hall is on its knees, and lots of people work there. When a government minister wants to go to the theatre next time, he might have a think about the person that opened the door for him, or put the lights on the stage, or whatever it may be. You don't mind taking their tax money next year, but they don't have any interest in paying them this year. I think that they need to step up now because at the end of the day, they can keep borrowing money its not like it's affecting them. The country is still going to be in debt. Rishi Sunak was doing a great job until he opened his mouth about the arts! Everyone loved Rishi and then he started talking about what arts people should do."

When a government minister wants to go to the theatre next time, he might have a think about the person that opened the door for him, or put the lights on the stage

Do you have any advice for other touring crews or artists that are struggling right now?

"Well, I mean, everyone's different. So I’m not going to start giving a mental health speech. But, the other night I went through the numbers afterwards and based on a certain amount of tickets sold – because obviously there was there was more coming in – we can get what we need to get We Need Crew off to a good start and we got our crew paid. Thanks to all the people that watched, we have raised a lot of money and the kick we need. We Need Crew is going to become effectively a charity now. I'm glad that we can get it off to a good start and I urge other artists to help with that as well. We all have touring crew, we won't be able to stick the show on without them. In terms of advice, because we don't know how long this is going to go on for you know, you can't really tell someone who's sitting at home out of our pocket to relax and hold tight because its not as simple as that, but where possible We Need Crew will try and help get funds to you and help in some shape or form."

Your album Heartbreak Weather came out in March right before lockdown. How has your experience as an artist been in 2020?

"Yeah, I released an album on the worst week in music history! So I wouldn't say it was the greatest launch of an album of all time [laughs]. But once I got my head around that, and realised that I wasn't going to be touring, it actually wasn't too bad. I started getting into a bit of a routine, working out and cooking. Luckily living in the city, you can get out and have a walk and a cycle. I started doing a bit of writing in the last sort of eight weeks or so and I didn't want to force that at the start. It was alright once I had my head wrapped around the fact that I wasn't touring and the album was released on that particular time. I just realised, right we're going to be in this for the long haul and kind of enjoyed the time at home. I haven't been home for this long probably since 2010! It was good. It was nice to not have to pack a suitcase all the time. I nearly forgot how to pack one [laughs]."

What’s next for you? Can we expect new music?

"I'd like to release stuff next year, I doubt it would be this year, and just kind of writing some bits getting in the studio when I can here. I went through a stage of writing absolute, toxic, toxic stuff. I’m looking forward to kind of getting into the room with some people and recording some stuff. Hopefully I'll have something next year at some point. I would like to come back with a bang. I don’t know if I’d like to just throw a song out in the middle of this. I like the idea of getting around the planet and I've learned that the hard way this year! So I would like the world to be at a point where I can get out about and do the promo."