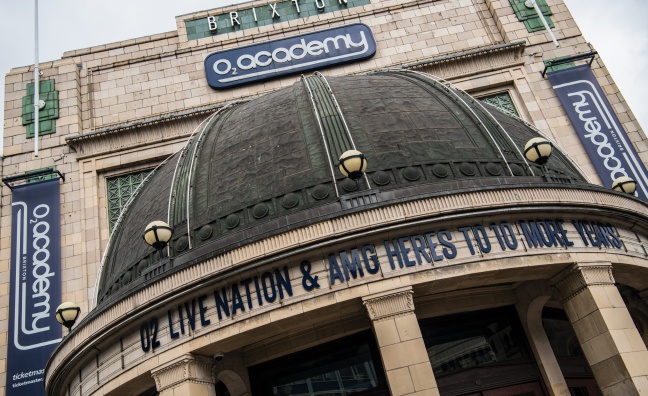 O2, Live Nation and Academy Music Group have today announced a new agreement for O2 Academy venues across the UK.

The deal secures O2 as the naming rights partner to 19 venues in 13 cities for a further 10 years. This renewed partnership will enable O2, Live Nation and AMG to provide fans with exclusive access to tickets: under the terms of the deal, double the number of tickets will be made available for O2 customers through Priority Tickets, for shows at O2 Academy venues as well as Live Nation shows nationwide. This will give customers access to even more venues, from the smallest of rooms to stadia, 48 hours before general release.

Paul Latham, COO, Live Nation UK and Ireland, said: “We are incredibly proud of our partnership with O2 which has revolutionised the way brands work within the live sector. This is more than just a naming rights deal. Over the last nine years, we have worked tirelessly together to build the O2 Academy brand, investing in these iconic buildings and giving O2 customers access to millions of Priority tickets.

"Close to four million live music fans come through O2 Academy doors each year to see the artists they love, across the UK. Continuing this deal with O2 ensures that these venues remain a vibrant part of their local communities and an integral part of Britain’s healthy live music market.”

The alliance between O2, Live Nation and Academy Music Group was established in 2008 to launch O2 Academy venues in the UK the following year. The initial agreement saw 11 venues renamed and O2 customers benefit from early access to tickets, paving the way for the successful Priority Tickets model.

There are now 19 venues nationwide and tickets to almost 35,000 shows across more than 400 venues have been made available via the Priority Tickets platform since 2009.

Nina Bibby, CMO at O2 said of the deal: “We know our customers love live experiences and O2 Academy venues are a huge part of the UK’s live music scene which is why we’re extremely pleased to be continuing our longstanding relationship with both Live Nation and Academy Music Group.”

Following successful trials, O2 will also install new technology in all O2 Academy venues to analyse the movements of the crowd to collect data for both fans and artists. The system will gather information such as calories burned, noise generated by the audience, as well as the most popular moment of the night based on the crowd’s response. Fans will receive a free digital memento with highlights of the night, whilst the data will allow artists to understand more about their fans’ reactions, as well as gauge which songs were the most popular for individual nights or across their tour.

See the latest issue of Music Week or click here for exclusive interviews about the deal with Latham and Bibby.