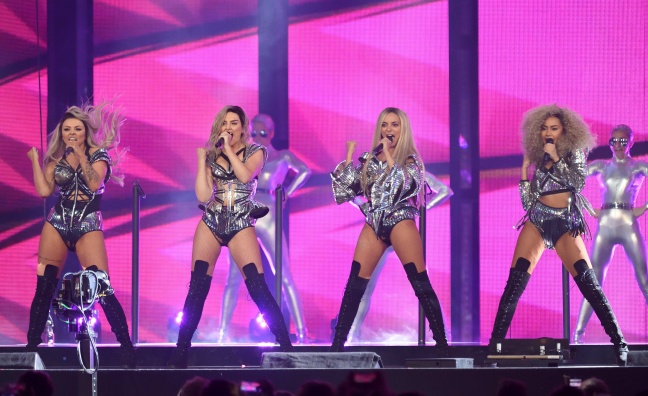 The four-piece, whose mammoth Glory Days arena tour wrapped up last month will play 15 outdoor dates across the country next July including stadiums in Swansea, Colchester, Northampton, Bolton, Huddersfield, Gateshead and Falkirk.

Here, Solo Agency’s Giddings, who also works with the likes of Madonna, Justin Timberlake and Lady Gaga, reveals to Music Week how it all came to pass.

What can you tell us about Little Mix's 2018 stadium tour?

“They are the only UK shows they’re going to be doing next year. It's a thank you to all of their fans. We sold over 400,000 tickets on the arena run we just completed and the girls are now going to have a long, well-deserved rest. But we thought [the stadium tour] would be a good idea building up to the next record and 2019.”

Looking at their touring schedule over the past few years, they must be the hardest working band in pop?

“Pop groups work 10 times harder than rock bands from my experience, having worked with The Spice Girls, Westlife and Boyzone - they’re all prepared to go that extra mile."

What was the thought process behind avoiding the major cities with next year's dates?

"We chose to go outside of the normal places to make it more interesting. I mean, we’ve just played every major city England, more than once."

And sometimes twice a day...

How have they evolved as a group in your time working with them?

“Their fanbase started out with young children and now women of 50 years of age think their music is great. Their music has developed: with a pop group you normally have one huge first album then they decline, but [Little Mix] have gone from strength to strength. And it’s not just the UK, it's worldwide. “

You don't tend to take on many young acts these days, so what made Little Mix a special case?

“I wouldn’t normally do it, I just thought they were great. I went to see them on The X Factor tour. I have worked a few girl bands in the past and I thought, 'Blimey, this one is really good'. I did the last Spice Girls tour [prior to their 2007 reunion] and it's the same vibe. When you go into an arena with 11,000 kids screaming their heads off, it’s exciting.”

Now they’ve reached stadium level, do you expect them to stay there?

“We’ll see, we haven’t planned further than that. It’s a thank you to the fans and it's going to the places that we wouldn’t normally go to before we release the next record, essentially.”