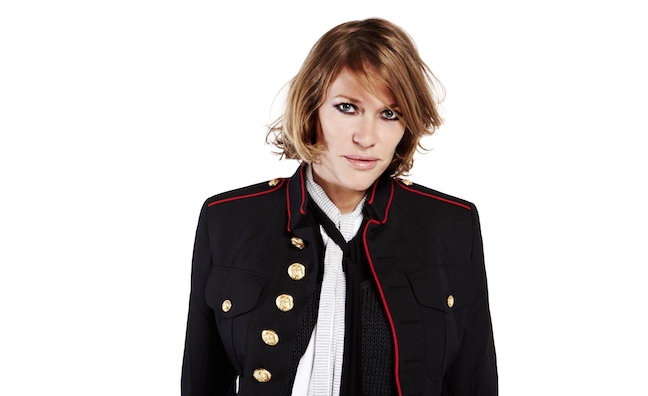 The Good Life Experience Festival returns to the Hawarden Estate Farm Shop this weekend (September 14-16) which means Cerys Matthews is spending a rare weekend away from the BBC 6 Music Studios.

Having founded the festival with music industry insider Steve Abbott and friends Charlie and Caroline Gladston, who are retailers, farmers and authors, the musician and broadcaster is very hands on with each year's event.

With The Go! Team, Bill Ryder-Jones and Gwenno among the music acts, plus food, comedy, campfires and sing-a-longs on the agenda, Matthews explains what she has planned for this year's festival...

What’s it like organising a festival? Obviously it’s a big job to take on...
"It is, but because it’s something like the radio show which I’m so passionate about, it makes all the hard work worth it. The reason why I wanted to start the festival in the first place is because even though there are a lot of festivals on the scene, I felt there was room for a festival which added a bit of outdoor activities, and nature and class to the more normal line-up of music and literature. I think that’s chefs cooking from campfires, activities like fire-walking, wild swimming, as well as there being an emphasis on crafts. A bit of everything! For me, I’m not the kind of person who likes going shopping – for a lot of people as well, its about experiences, and trying out new things, with my time off. So it’s for the curious minded, basically."

What are the things that you’ve learnt over the last few years of doing it?
"I’ve learnt how to roll my own cigars! I’ve learnt that I can’t dance! It’s quite a small festival, we’ve got a capacity of about 5000 and the main tent has a capacity of about 2000. I can get everybody up quite close to a DJ like Giles Peterson; this year we’ve got Trevor Nelson and Norman Jay. I’ve learnt that you can watch them like you would watch Ornette Colman or any musical great. Just watch them react to the crowd, how they’re playing, what they’re doing while mixing – it’s just unbelievable watching someone like Giles Peterson and Norman Jay at work."

Is it nice having it quite late in the festival season, when everything else is out of the way?
"We wanted a weekend where there wasn’t another massive festival on at the same time, and that’s quite difficult as there’s so many fesitvals throughout the summer. But the main reason why we chose that date was because we opened up the weather reports from the minute they’ve been starting, and looked at the trend of the weather and the rain without going too close into winter, and it was most likely not to rain on that weekend. So far, so good..."

Do you perform yourself?
"I don’t like to perform, but I do like interviewing people and so for instance Michael Morpurgo came last year and Michael Rosen, and Jeff Barrett from Heavenly Records. So if anyone needs to be interviewed, I’ll go along and do a bit of that."

I felt there was room for a festival which added a bit of outdoor activities, and nature and class to the more normal line-up of music

How’s the line-up looking for this year?
"If you go on The Good Life Experience website, then you’ll see the list of international sets, speakers and authors. Every year we are growing – so last year we added a new tent, Kansas Smitty’s, so they’ve got a pub, bar, jazz thing in Bethnal Green all year round. And then we put them in a field that weekend in mid-September, and programme a whole list of jazz performers, so that’s a new addition. We’ve got the classical music on Sunday, we had Max Richter play, it’s a complete and utter mix of genres. What we try and do is to handpick everything so whether you’ve heard of these guys, or not, they’re hands-up good musicians, and people can trust us, so we’re not part of the scramble for headliners. I think there’s an awful lot of performers and recording artists who for whatever reason don’t get picked up as the new next big thing are really talented, and shit over the ones that do get more attention. We’re not about all the headline stuff and all the smoke and mirrors of all of that, there’s no VIP area either. It’s all about the craft of playing. It’s just really unique in that sense; there’s no corporate deals in the background, it’s all strictly hands on and handpicked."

You’ve got Gwenno playing, is it good to have a Welsh language element?
"That’s a new addition this year; I wanted to bring in a corner where you could go and have a pint and try and talk Welsh! So we’ve got a little Babel’s corner where I’m going to get Welsh historians to sit round the fire so you can pick their brain because actually’s quite auspicious, because it’s right on the border between Wales and England, so you can say you’ve been on the border, and in fact Llwellyn the Great fought over the land, so for me it’s really special to be there, to think that this is the land where Llwellyn the Great actually stood!"

What do you think about the campaign for gender balance generally at festival?
"I think no matter what role you have in society, we all have the onus on us to keep progress going to make sure all classes, all colours, all creeds, all genders get the opportunity to get where they need to be going. That’s not happening at the minute; social mobility seems to have stalled, there’s not an equality within the school system, there’s school-tie issues going on in politics, there’s issues with both central and local government… It’s not just a gender thing, it’s a class thing as well. But whatever you do in life, you have to try and listen to everything and take into consideration where one person has had more of a leg-up than somebody else, and act on it – that’s what I think. When I programme my radio show, I don’t only want to play Anglo-American music. I think with the way the world is right now, we ought to be able to listen to music in all different languages and cultures and simply play great music. Because the bigger the pool of music and artists, the better the quality – not tokenism, but you must take into account who’s had the leg ups. Because if you’ve been through the public school system, you’ve had so many leg ups. I think it should be more females but also more people from working class backgrounds, and more people from all walks of life. Simply – that’s the ideal, that’s progress for me. When we start working more towards that, that’s when you maybe have the chance for more contentment and happiness. Until that point, we’re never going to see progress."