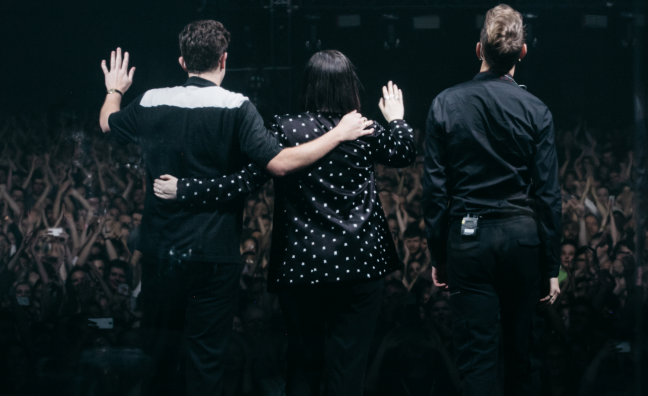 The trio sold out all seven Brixton shows, which ran from March 8-15. The previous record stood at five nights, shared by a list of artists including The 1975, The Prodigy, Hard-Fi, Nine Inch Nails and Rammstein.

The Brixton series evolved into a mini-festival, Night + Day, complete with support from the likes of Sampha, Robyn, Francis & The Lights and Cat Power, alongside after-parties and other events.

Outside their home city, the band also reached capacity for two nights at O2 Apollo Manchester and maiden arena dates in Nottingham and Cardiff, in their first UK tour in four years. After US and European dates, the xx will return to the UK in late summer for shows at The Galvanizers Yard in Glasgow and at Bestival.

Here, The xx’s booking agent David Exley, who has worked on the campaign alongside his Coda Agency colleague Tom Schroeder, gives Music Week the inside track on the strategy behind the tour.

It was phenomenal. Once we heard the record Tom and I were pretty confident they were going to make a step up, especially after the success of Jamie’s solo album, but it really exceeded our expectations. All seven Brixton Academy shows sold out on the first day – 35,000 tickets. Even Nottingham and Cardiff sold out comfortably, which are trickier cities than they used to be for an act like The xx. Those shows were around 8,000 cap each – the most we’d done outside London previously was 3,000.

How has the tour gone?

It’s been incredible on all fronts to be honest. The band are playing better than they’ve ever played before. The show is stunning – really ambitious and original. The crowd reactions have totally blown the band and team away.  At one point the other night in Manchester the crowd noise reached 125dbs – that’s louder than the band’s show!

What factors came into play when deciding this was the right time for the band to step up to arenas?

I’ve felt for a long time that it’s crucial to underplay on a first album, especially one like The xx’s debut, which was incredibly intimate and hushed. When we came to plot the second album campaign, we stepped up the show production and the festival stage sizes, but we held back again to a certain extent on headline shows. With this album Tom and I knew straightaway that we should go to arenas. The band were full of confidence and the music was more upbeat and broader in scope.

What was the reasoning for the band playing seven Brixton nights as opposed to, for example, a couple of London arena shows?

We have always tried to think outside the box with this band and we have always done something special in their hometown. When we talked about venues it was hard to see past Brixton Academy to be honest – the atmosphere is unrivalled, it’s big enough to accommodate an arena production and it’s a stone’s throw from where the band grew up. When I came up with the idea of doing multiple nights there, the band’s manager [Caius Pawson, Young Turks] just ran with it. We decided we wanted try and break the record and the idea of a week-long Brixton takeover was conceived. It evolved into a mini-festival with different high-profile support acts each night, after-parties, film screenings during the day, a radio station takeover, various initiatives involving local charities, including a Jamie xx charity show on their one day off, and lots more. The great thing was all this was announced way after the shows sold out, so it was a really exciting surprise gift for the fans.

What makes The xx such a special band?

From day one they have made interesting and original creative decisions on all aspects of their career.  Musically I think it’s fair to say their sound has been hugely influential. The live show is incredibly inventive, both musically and visually. The artwork is striking and distinctive. They have always pushed me to do the same with their live career – from putting on their own festivals across the world, to playing 18 shows at a 60-capacity venue at Manchester International Festival, to this Brixton series.

What can you tell us about their future live plans beyond this summer?

They will be focusing on other non-European territories for a while but we are discussing some exciting options for the UK next year as I speak.