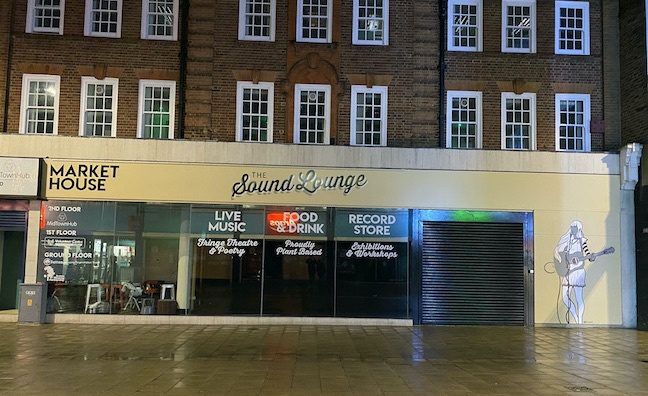 The Sound Lounge is opening a new, purpose-built community arts hub in Sutton, Surrey on December 12.

The not-for-profit South London-based venture will stage concerts, showcases, record launches, interview Q&A sessions and album playbacks, among other entertainment. All live events will be conducted in line with current government Covid-19 guidance.

Its opening programme of events will feature artists from both sides of the Atlantic as well as fast-rising talent from the roots, country and Americana scene. It will be previewed at an invitation-only event on December 9, with live performances by Ward Thomas and ASCAP Award-winning singer-songwriter Charlie Dore.

We're making the impossible happen and we believe it's exactly what is needed for communities, high streets and for the industry

Co-founders and musicians Hannah White and husband Keiron Marshall said: “We've been setting up and running venues for some years, so we're not lightweights, but there's no denying that this has been hard. We've spent many evenings since the first lockdown with our heads in our hands wondering how we were going to survive the lockdowns.

“But the landscape for live music was inhospitable way before Covid, so we were always prepared for a tough road. Our philosophy has always been to keep going until it’s physically impossible to do so. That seems to have served us well so far. Against all the odds, and with a lot of help from our supporters, we're making the impossible happen and we believe it’s exactly what is needed for communities, high streets and for the industry.”

The launch season, which has been curated by venue patron, music journalist and broadcaster Paul Sexton, will feature the likes of Graham Gouldman, Chris Difford and John Illsley.

White and Marshall will also celebrate the recent nomination of 2020's Hannah White & the Nordic Connections as UK Album of the Year by the AMA-UK, the UK's Americana Music Association.'

Other regular features of Sound Lounge programming will also be part of its opening weeks in December and January. Performances will be streamed to the venue's live audience direct from the US, including sets by Nashville artists Gretchen Peters and Ashley Campbell.

Also in the launch line-up is the first in what will be a series of informal Q&A sessions in which Sexton will be joined on stage by some of the most notable names in music such as DJ David 'Kid' Jensen.

The venue, located in the centre of Sutton as part of a planned redevelopment of the lower high street by Sutton Council, will be open every day, offering a cafe?, fully licensed bar and plant-based kitchen with a seasonal menu designed by Marshall. It will also have its own record store, a branch of Union Music, based in Lewes, East Sussex, offering a wide range of vinyl.

Sexton added: “Everyone who's visited the Sound Lounge in its previous settings goes away feeling that they've been to far more than just a gig. They've also taken part in the sort of shared, community experience that exists in so few venues. Hannah and Keiron are about to make that happen again in this amazing new venue, and we can't wait to get started.”