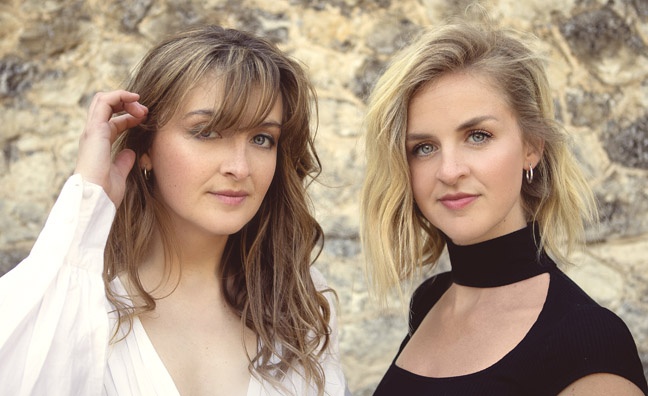 In the new edition of Music Week we speak to UK country stars Ward Thomas, not only about their new album Invitation but also, well, all albums.

The duo – who helped UK country music score its first, and so far only, No.1 album back in 2016 – have signed up alongside the likes of Kim Wilde, Carol Decker, Blossoms, La Roux and more as official ambassadors for National Album Day this Saturday.

“What would really be lost if albums were a thing of the past is the actual journey of getting to know an artist,” Catherine Ward Thomas told Music Week. “I genuinely don’t think you can get to know an artist in one song or random tracks.”

Released today (October 9), Invitation, Ward Thomas’ fifth outing, gives us a good chance to get to know the group better. In the feature the sisters talk about how they gravitated back towards "country-vibing" music after the pop-leaning experiments on 2019’s Restless Minds and how they have contended with the pressure of living up to their 2016 No.1 album Cartwheels.

Invitation is also something of an independent affair – the sisters, aged just 25, having already fulfilled their three-album deal with Sony. Catherine and Lizzy have been hands on in every aspect of the record – from recording their own vocals, to arranging video shoots and photography.

But while the album was independently conceived, it is being released by East West, which is now set to be their future major label home – “Warner gave us a really, really great deal,” said Lizzy of how the major approached them.

As part of the album launch, Ward Thomas will also be conducting a ticketed livestream event on National Album Day (October 10) with support from Warner’s rising Nashville star Devin Dawson.

“This is a first: two country-pop artists, one from the UK, one from the US, on the same ticketed livestreaming event,” Julie Eldridge, director of artist projects at East West, told Music Week.

Here, in an unread extract of our interview, Catherine and Lizzy Ward Thomas talk about Invitation, the benefits of independence, and why albums matter…

What was the appeal of taking part in National Album Day 2020?

CT: “Well, although we're from the sort of streaming age technically, we've always been album people, even before we started writing our own music. We come from an album family where we had a record player and, for us, a lot of the way that we listened to albums was in the car with our family. We listened from track one through to track 12 in order over and over and over again because it would just be the album that was in the car. Fleetwood Mac’s Rumours album was a huge part of our lives growing up, just listening to that album over and over again – you really get to know an artist when you listen to an album from start to finish.”

LT: “Our parents were very musical, and they were in a band together when we were growing up, and our whole upbringing was all around the ’60s, ’70s, ’80s music that they loved. Then, obviously, we got really into country music as well on top of that. So we've always been very real music lovers.”

You said that a world without albums would be one in which people didn’t really get to know artists. In what way specifically?

CT: “It would definitely change our perception of artists. I really think we would look at singers in a very different way. The reason why people are such big fans of artists like Joni Mitchell is because they're engaged in her. Obviously, everyone loves A Case Of You, but they love Joni Mitchell. People buy into the artists, they don't just buy into a song. Something that I've noticed happen a bit more recently is that, worryingly, you might know a song and yet you'll have no idea who wrote it.”

LT: “It makes me very sad to even think about that. Our dad is such a music follower, that when we first went out to Nashville and we were recording, he was talking with all the musicians about different albums of different artists that they all loved. He was talking about all the musicians that played on those albums: he knew all the names and I was like, ‘People already don't look at that anymore!’”

CT: “He would literally read all the lyrics, he would notice when the same musicians played on different tracks of different artists. He was just so much more engaged. You still see that now, but it's much more of a cult following. It's not such a mainstream thing.”

LT: “I also think it would also affect live music. When bands go on tours, and people buy tickets to go see live music, they go to see the whole package. A show is meant to take you through a journey [not just] banger after banger, song after song. I do think [a world without albums] would have a massive effect on tours and live music as well.”

Moving onto your own new album, Invitation, what does it say about where Ward Thomas is at right now?

CT: “If we were to look at the track listing of [2019's] Restless Minds, and pick out our absolute favourite songs from the album, they were always the more organic, more ballad-type, country-vibing songs. So when we set out to write this, we had more of an open mind to just be like, ‘Let's just be really normal and real and not try and think too much’. It automatically fell into being a much more country, organic-feeling album.”

It was largely recorded during lockdown – do you think you would have ended up making a different record if that wasn’t the case?

CT: “We lived in a very tiny cottage and had a microphone, and a little interface on our kitchen table. We were literally sat in our pyjamas with cups of tea doing a lot of the vocals – it really relaxed us!”

LT: “When you relax, you really just get into the emotion of the songs without the slight embarrassment of other people watching you…”

CT: “Especially when you do a terrible take [laughs].”

How did you guys end up working with James Blunt on Halfway?

CT: “That was really out of the blue, actually. James had written the song and he thought it was quite country and he wanted it to be a duet – they were looking at Carrie Underwood to do it with him, but he really wanted a British act and so we got a phone call, like, ‘How do you feel about singing a song was James Blunt?’ We were like, ‘Ha, is this a joke?’ He actually approached us, which was really, really cool. We couldn't believe that he even thought of us, or he'd even heard of us before. That was just really exciting. I think we're going to carry on working with him in the future as well.”

You’ve said that by doing this album independently you felt you were in the “driver’s seat” – is that a level of control you'd not had previously as artists?

CT: “I mean, we've always been very vocal in our creative process. But we've always also been very collaborative with a lot of other artists, musicians, producers and management, songwriters. So when we were suddenly in our house and having to make a lot of executive decisions we had to make things happen, or they wouldn’t.”

While independently conceived, Invitation is being released via East West/Warner. What was the appeal of working with them?

CT: “Honestly, we were ready to go independent with this album. We made it with full expectation that we were going to go independent and then Warner just came around the corner with an offer very, very quickly. We decided to go with Warner because we really, really liked a lot of the people in the team. We're really, really looking forward to working with Paul Samuels, their A&R guy, he has some amazing ideas. We just really liked the vibe of everyone and how they seemed to be invested in us and the album.”

LT: “Once we finished our contract with Sony, it was very natural. We finished it and we wanted to go independent for a bit for a year, see how it goes, and do an album. So we were always very open to see what offers come through the door, and open to carrying on being independent. And then Warner gave us a really, really great deal.”

Ward Thomas’ Invitation is out now via East West. Tickets for their livestream on October 10 [8pm BST / 9pm CEST] with Devin Dawson are on sale now.