The O2 to host Kpop.Flex festival over three days 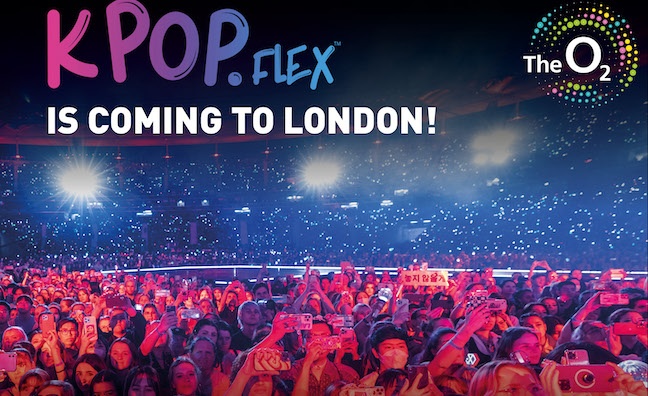 Following its inaugural edition at the weekend (May 14-15), the Kpop.Flex festival has announced three dates at The O2 in London next year.

The three-day, cross-campus event will utilise the venue’s arena, as well as Indigo at The O2, and a range of other locations across the campus, with a Fan Fest offering fans a range of activities to immerse themselves in Korean culture.

Although the line-up is not yet confirmed, fans can expect an “array of the world’s biggest K-pop idols”, according to the announcement. The Frankfurt event featured Exo’s Kai, Monsta X, Enhypen, NCT Dream, Mamamoo and more.

South Korea is now the seventh largest music market in the world, and the UK is increasingly embracing K-pop acts.

To celebrate and honour K-pop talent, The O2 event will debut the inaugural Kpop.Flex Awards For Emerging Artists on Saturday, September 23. Details are to follow.

Steve Sayer, VP and GM at The O2, said: “We’re so excited to be hosting Europe’s largest ever K-pop festival here at The O2 in September 2023. In recent years, K-pop has taken the world by storm and so this is a huge milestone for us. We can’t wait to build on the success of previous hugely popular K-pop performances at the venue, and welcome some of the world’s top K-pop acts and their legions of fans to The O2 for a fantastic weekend festival event that will take over the full campus at The O2.”

The event is being staged by Kpop Europa, in partnership with promoter PK Events. Kpop Europa is a joint venture between Live Company Group and Explorado Group.

David Ciclitira, founder and chairman of Live Company Group, said: “We’re delighted to be working with The O2 to deliver three incredible days celebrating K-pop to fans across the UK and beyond. We are super excited about the first edition of the International Kpop.Flex Awards, which will showcase the very best talents of the K-pop world!”

Tickets will be available to purchase soon via the official site.

Kpop.Flex also recently announced that the festival will be returning to Frankfurt in 2023, with a weekend edition on June 17 & 18 to be held at Deutsche Bank Park stadium.