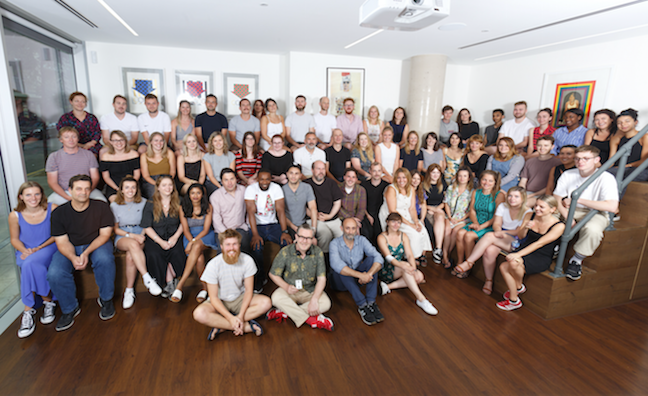 Alex Hardee has told Music Week that his Coda Music Agency could one day become the “biggest agency in Europe”.

In the new issue of Music Week, together with colleagues Tom Schroeder, Natasha Bent, James Whitting, Chris Hean, Geoff Meall and Solomon Parker, co-founder Hardee offered insight into what sets Coda apart from its competitors, and where it could go in the future.

Bent, Hearn, Meall and Parker have all arrived at Coda in recent years from rival companies, and Hardee put Coda’s desirability down to the fact that it “looks after people”.

“It’s not a dictatorship, there are no barriers and it’s very open,” he said. “We’re very happy to let other people take the lead here.”

Bent, who works with the likes of Chvrches and Foster The People, said: “There’s no pyramid system. That’s allowed everybody to find their lane.”

Schroeder added: “We’ve backed ourselves and done things differently. We’ve been the underdog and we’ve enjoyed that; we’ve been more artist-centric and innovative, and we’ve ended up with an enormous chunk of market share.”

Digging deeper into the company’s operation – US giant Paradigm bought a 50% stake in 2014, while a JV with Independent Talent Group was launched last year –Hardee revealed why record companies “recommend” Coda.

“A lot of people at record labels say they recommend Coda because they felt we were the first to go into planning meetings and actually add something to the discussion, rather than just go, ‘Get me a hit and here’s a set of dates,’ he said.

“The worst meetings are when everything’s going right, your value becomes a lot more apparent when it isn’t and you work out how to correct it – that’s where you earn your money.”

Hardee, who is exploring the possibility of expanding into football agency, emphasised Coda’s multi-dimensional offering.

“We are the closest to the 360° service that Americans have – we have corporate, sync, film and branding departments – so I don’t know... Maybe one day we’ll be able to say we’re the biggest agency in Europe.”

Subscribers can read the full interview with Coda staff here, and our Alex Hardee cover story is available here.