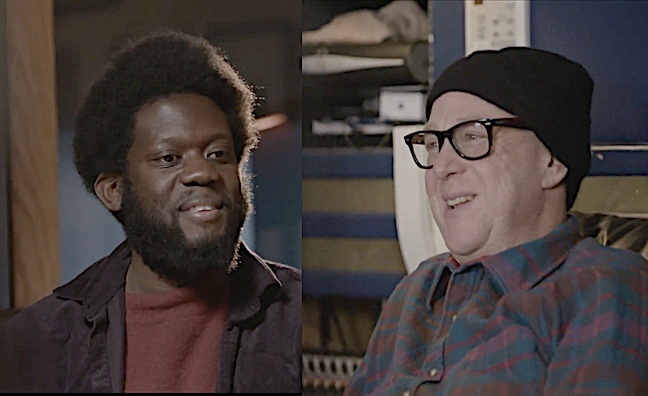 Because of the Covid pandemic, the Artist & Manager Awards staged by the FAC and MMF have been reimagined as a documentary film. You can read all the winners here and watch the documentary here from 7pm GMT on Wednesday (February 24).

Starwood Management (Robert Swerdlow, Dave Nicoll and Mark Nicholson) and Michael Kiwanuka feature in the documentary for their award category, which is sponsored by YouTube Music.

Here, ahead of the awards documentary, Starwood Management’s Robert Swerdlow reflects on his decade-long partnership with Kiwanuka, as well as discussing other artist clients including Little Simz and The Kooks…

How does it feel to receive this recognition from the wider management community?

“Well, we’re very proud. Management is one of the most difficult roles in the music industry, and sometimes it goes unseen. So to be acknowledged by the community is nothing other than very humbling and we’re full of gratitude for it. It’s just very rewarding to be recognised by the community we work within.”

How have your artists kept their spirits up during the pandemic?

“To be honest, all of our artists have welcomed a forced respite, there's no doubt about that. It's allowed them to focus and intuitively go to a creative space. It’s incredibly gratifying for any artist to get back to being undisturbed in their creativity. In the absence of engaging with an audience and all of the great things that go with it, putting music out, enjoying the prospect of making music and actually delivering music is great. At some point, it will be very exciting [for them] to go out and the play new songs and test them.”

How would you describe the partnership with Michael Kiwanuka – what makes it work so well?

“I think we’ve built up a very trusting relationship where –unconditionally – we have his back to give him 100% support to deliver his vision and artist proposition. So we try and help pilot and steer the career without getting in the way; and we bring a deep passion for music.”

How significant was his Mercury Prize victory last year?

“For Michael's self-esteem, it's been invaluable. Just to have that recognition as an artist is an energy that you can't get anywhere else in this country. The Mercury Prize is exactly that, it's testimony for him as an artist. That spurs him along to be very creative and take his songwriting into the next album with huge confidence.

“As far as the business side goes, we've been able to go back into our beloved partnerships with radio stations, DSPs and television performances. Just as you would come to the tail end of the traditional cycle, it’s allowed us to reset and go again. We added another dimension of time into a campaign. We believe we put records out that are evergreen and that last forever. So it's just another booster into the campaign, and it gave us opportunities to get back into putting more music out and more songs for the audience.”

What was it like being a winner in a pandemic year?

“It had its up and its downs. The downside was that you’re not in a room in a high-sprited environment with a countdown where nobody knows [the winner]; and you’re not with your comrades when Michael gets to pick up a winning prize in front of everybody. That’s a great, celebratory experience.

“But at the same time, from a profile point of view and actually sharing that great news, I think that the Mercury team came up with a fabulous solution and there was more visibility on Michael winning through the TV show and through the Jools Holland experience. Media gave more attention to it, social media got more behind it. So as far as sharing the win goes, there was more noise behind it. A great experience came out of what could have been seen as a negative environment and atmosphere. And what we got from that is that the record re-charted and we got back to [Top 5] in the charts very quickly.”

What's the global outlook for him at this point in his career?

“Michael has a global audience that we've built up over his career so far. [The Mercury Prize] has helped to keep the spotlight on that and the story does translate internationally. While we haven't been able play overseas to the fans, it has been a reminder of how good Michael is as an artist. That's helped substantiate that fact at a time when we haven't been able to get into the markets.”

Is he working on the follow-up LP?

“Yes, he is writing all of the time at the minute and looking to get back in the studio with Danger Mouse and Inflo in the unforeseeable future. A new record is definitely in the making soon.”

How has the pandemic been for Little Simz and the development of her career?

“Little Simz put out the Drop 6 EP in the first couple of weeks of lockdown. It was very successful, she quickly responded to being at home and being creative. In a very independent spirit and a very DIY way, she turned around music and visuals that we could release through AWAL and got back into growing her profile and building off the back of Grey Area, the last album. It was absolutely fantastic. Not only did we get the support from radio stations and DSPs in growing her story, we also landed a couple of really big syncs with New Balance and Uber Eats. So her lockdown creative opportunities were fabulous, both for the fans and the industry.”

What about the impact on The Kooks, who are a hugely popular touring act?

“Looking at the restrictions of touring and keeping close to our fans and anticipating getting back to touring, we decided to really unearth and celebrate a timely 15-year anniversary of their debut album, Inside In/Inside Out. Working very closely with Universal Music, we have started a really creative rollout of celebrations – unearthed content, unearthed tracks from the studio, lots of unseen footage and engagement from the band. We're having an absolutely wild time with that, it’s going really well. That has actually now led to potential touring off the back of that, specifically the Inside In/Inside Out album to be played in full. It’s also given them plenty of space to write and deliver a brand new album with AWAL.

“They are a very successful, global touring band and their fanbase goes from strength to strength. It is well catalogued that streaming has given their songs an even bigger audience, as they've gone from being a pre-streaming band into a successful streaming band.”

You have always remained based in Liverpool. Does that change your perspective as an artist manager?

“It's working very, very well for me. It was never a problem. Our offices are in London, my partners are in London, and so for me to be present in London has been achievable and it's very manageable. But what I'm finding as we've all come to our reckoning with Covid and Zooms, is that a lot of people are realising that they can actually successfully work from home, and potentially work outside of the capital and get back into the regions. I'm hearing that from a lot of creative companies. A couple of people I know personally have made that made. So maybe I was ahead of the curve!”