'Many of the current conversations are lacking the manager's voice': Music manager bodies unite to launch EMMA 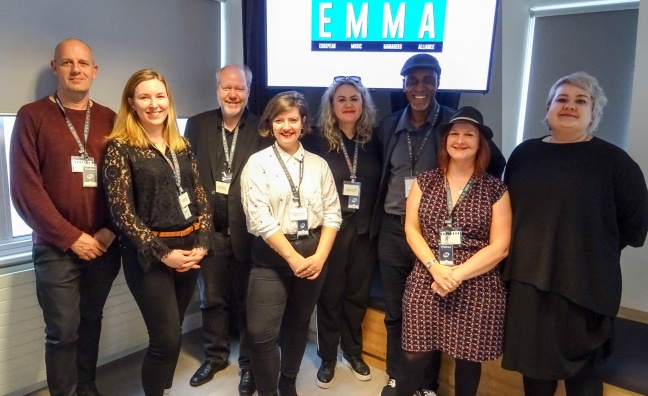 Music managers have formed a new pan-European collective body in a bid to give artists' representatives a stronger voice in decisions concerning the future of the global music business.

"If you look in recent weeks at the money coming in from Spotify and Facebook, and various new revenue streams - quantities of money that we've never seen before - the distribution is something that is up for debate. It's great that the major labels have all agreed to distribute, but you'd think that there'd be an upfront conversation about exactly how that distribution is going to take place. One of the possible reasons why there hasn't been is because people need to know who to talk to."

EMMA will collectively represent over 800 managers across Europe, and another 600 worldwide. Initially, it will focus on three specific issues: licensing and fair remuneration, public policy and education research.

On Brexit, Harris said: "There are potentially a vast array of changes that's going to bring about and those changes are going to be two-way. European managers wanting to put their artists on the world stage will also be affected by the changes and the interactions between the UK and the rest of Europe. So we recognise that is really important right now to make sure that those managers have a voice."

MMF UK CEO Annabella Coldrick added: "I do believe very, very strongly in the power of the collective, that's why I took this job and I think there is so much opportunity for us to work together. There's stuff we do on education, which is relevant everywhere, and the campaigns we run don't stop at national boundaries, whether it's secondary ticketing or how do you get transparency with dealing with major labels or DSPs."

Spotify was a frequent topic of conversation in the wake of last week's IPO.

"It's been very painfully obvious that, with Spotify becoming a major player, they are focusing on labels, not managers. They don't really see how to turn to the management side to get an effective dialogue and I think that's why EMMA will be so important," said MMF Poland chair Magdalena Jensen.

It's not to be a top down organisation. Our agenda has to be driven by our members, otherwise there's no point.

Harris pondered what would happen "if Spotify failed". "By the end of this year it is quite possible that both Amazon and Apple between them will have a larger number of paid subscribers than Spotify," he said. "That's a real problem for Spotify, because both of those two services don't rely purely on streaming services to make their money - the money's coming from elsewhere - so Spotify is very vulnerable."

Stressing that he was only currently the interim chair of the new management body, Harris added: "Our intention is to have our rules of engagement in place by Midem, so we will know the size of the board, we will about board elections, we will know who will be the long-term chair," he said. "But right now we needed to have something to get the ball rolling."

Jensen emphasised that EMMA would be a "members-driven organisation". "It's not to be a top down organisation," she said. "Our agenda has to be driven by our members, otherwise there's no point."

The body now plans to apply for a network grant to the European in the autumn to help fund its work. "We'll hopefully be able to put together a secretariat in the next few months that will be able to administrate that," concluded Jensen.