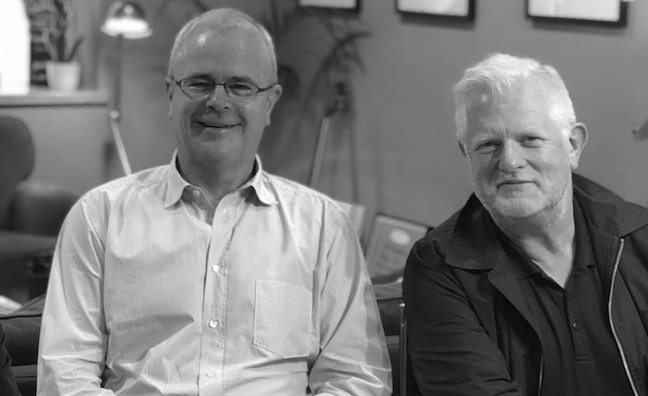 The pair, who picked up the Music Week Strat Award in 2013, will share the 28th MITs award at the ceremony in London on November 4. They follow in the footsteps of previous winners such as CAA boss Emma Banks, Sony Music CEO Rob Stringer, Sir Lucian Grainge, Michael Eavis, Kylie Minogue and Roger Daltrey. And, as always, the event will benefit the BRIT Trust, which recently celebrated its 30th birthday, and Nordoff Robbins.

“It is indeed a great honour for Richard and I to be given the MITs Award and to have the opportunity to highlight two exceptional charities in the BRIT Trust and Nordoff Robbins,” said Magee (pictured right). “We proudly look forward to November 4 for some fun and fundraising!”

“It is such an honour to be receiving this amazing award together with my great friend and partner,” added Griffiths (pictured left). “To help raise money for these two wonderful charities is an honour and a privilege.”

The pair formed Modest! in 2003, and their current roster includes the likes of Niall Horan, Little Mix, Olly Murs and 5 Seconds Of Summer. They also powered One Direction to global success, selling over 75 million albums and selling out stadiums worldwide. They also work with the likes of Katherine Jenkins and Alison Moyet; and have partnered with Simon Fuller on managing the reformed Spice Girls.

“With Richard Griffiths and Harry Magee, I struggle to know where to even start… What incredible men these two are!” said Horan. “I’ve been working with Richard and Harry for nearly 10 years now and, if it wasn’t for them, I don’t know if we all would have had half of the success we did.

“On a personal note, I know they’ve worked their arses off for me and I can put it all down to the kind of relationship I share with them,” he added. “They are basically like my uncles. We’ve been all over the world together, laughed together mostly, cried together at times, but most importantly had many great nights on the wine together! I’d do anything for these men and I can comfortably say that they would do the same for me. These boys are music industry veterans and it’s only right they get this honour and even more right that they are the first managers to do so.”

“Richard and Harry are more than just managers to me,” said Murs. “But let’s be honest - for the last 10 years we’ve talked more about football than music. Anyone that knows you guys knows how hard you both work, and I can’t think of two more deserving people for this award. Now I’ll stop blowing smoke up your arse and get back to work!”

“Unquestionably loyal to each of their artists and standing our every corner, Modest! are so much more than your sponge management,” said Moyet. “It is not running high days with hot acts that flags a manager as outstanding, it is the ability to find the heartbeat when there is no discernible sign of commercial life and to platform it successfully. Modest! have given me the space and respect to be the creative I needed to be. I’m so grateful for that.”

MITs chairman David Munns said: “Richard and Harry have been at the forefront of the British music industry for over 40 years. Individually and as the founders of Modest!, they have continually set the benchmark in management and have led countless artists to huge success. Honouring two artist managers is a first for the MITS and we’re proud for them both to join the illustrious recipients list. We look forward to a fantastic awards night on November 4.”

Prior to Modest!, Griffiths founded Headline Artists in 1974, becoming the first international agent for AC/DC. Three years later, Griffiths was A&R for Island Records, signing the Buggles, whose Video Killed The Radio Star was the first No.1 in the storied label’s history.

During the ‘80s, Griffiths managed Ultravox, ran Virgin Music Publishing and signed Tears for Fears, Culture Club and Pet Shop Boys, and founded the US division of Virgin Music. In the ’90s, as president of Epic Records in New York, he launched the Epic Soundtrax label for film music (Dances With Wolves was its first release) and signed Oasis for the US as well as Pearl Jam, Rage Against The Machine and Korn.

Returning to the UK, he held senior executive posts at BMG Entertainment in the UK and Europe, and in 1999, oversaw the signing of Westlife to RCA Records with Simon Cowell. One year later, he brokered the deal with Cowell which created Syco Music and Television.

Leaving BMG in 2001, Griffiths set up the UK arm of American management powerhouse The Firm, where he and Magee worked with Enrique Iglesias and Linkin Park, among others.

Magee started in retail in Manchester, then moved to London and formed the Anglo-Swedish indie Wire Records, with offices in Stockholm, London and Hamburg, and an artist roster including All That Jazz, Thirteen Moons and The Leather Nun. Magee joined BMG in 1989 as Arista Records’ head of marketing. He navigated the breakthrough of Lisa Stansfield and her first two multi-platinum albums, and the UK achievements of Arista’s US stars, including Whitney Houston.

There were further accomplishments when Magee became managing director of Big Life Records (Yazz, The Orb, Naughty By Nature), working with the late, legendary Jazz Summers. Then, as general manager of A&M Records, Magee helped to steer the success of Sting, Bryan Adams, Sheryl Crow and Soundgarden.

Returning to BMG in 1998, Magee was appointed managing director of RCA Records. He established a vital association with Simon Cowell and acts Westlife and Five, while working with Natalie Imbruglia, Foo Fighters, and Annie Lennox and David A Stewart as they reformed Eurythmics. In 2001, Magee joined Griffiths to establish the UK division of The Firm.