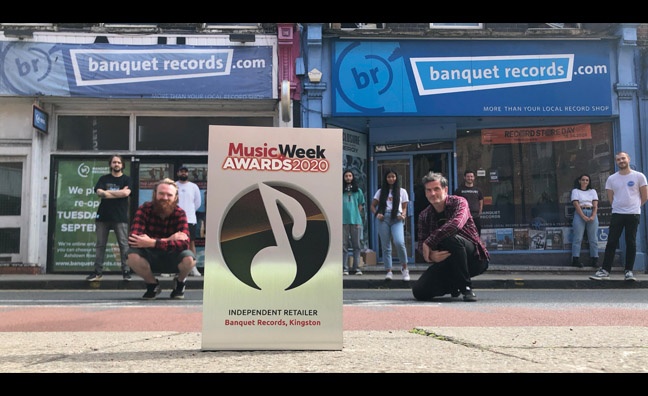 In the new issue of Music Week we speak to all the winners, and that includes Banquet’s MD Jon Tolley who celebrated Banquet reclaiming the title, having previously won a number of times, the last of which being back in 2017.

Tolley – who said he was devastated to miss out on the ceremony’s usual cheesecake offering – was quick to stress that while his store was delighted with the result, independent retailers are not in competition.

“Someone has to win this thing, and I'm very glad it’s us, the staff have worked really hard and it’s recognition of that,” said Tolley. “But, as cliche as it is, I can't think of any industry where we all want each other to succeed as much as this.”

While there have been some heartening headlines to have emerged out of the independent retail sector during the trials and tribulations of the coronavirus pandemic, Tolley warned that they should not overshadow the reality. Stores still need help.

“You hear the good stories, but you're probably not hearing the bad stories so much,” he told Music Week. “I think that's worth mentioning. For us, how we do our web-based stuff has improved. And it's had to. Necessity being the mother of invention, we had to change the way things work and we've been very busy online. But over the counter? We're still not open yet. So that’s taken a hit. And we’re a concert promoter and we put on 200 gigs a year and we haven’t put on a gig since March. Not a public gig. So many things are affected. So while the website sales are keeping us going and we're busy, we're not worried about the immediate short term future, I think the long-term future of a big recession way worse than we’ve seen before is going to really hurt, but these macro things are so beyond our control that all we can do is just keep going with what we’re doing.”

To that end Tolley said a host of recent initiatives have helped. This weekend, for example, sees the second installment of Record Store Day. After the original April 18 date was pushed back to June 20 due to Covid-19, it was elected that the revised 2020 edition would be split over three dates: August 29, September 26 and October 24. Banquet reported a blockbuster experience first time around...

“We had six weeks of orders in six hours,” explained Tolley. “But it’s still a struggle, at the moment we’re still social distancing within the shop, so in a room where we would only have four people packing up orders, we've got one person – that's a challenge. But you want these kinds of problems. I want to nod to all the initiatives like Record Store Day and National Album Day. I think what the Dinked collective which I'm just a member of rather than anything involved in the organisation of it has been really good – any of these kind of initiatives give us a reason to talk to the customer.”

Subscribers can read our in-depth 2017 feature on Banquet Record here.