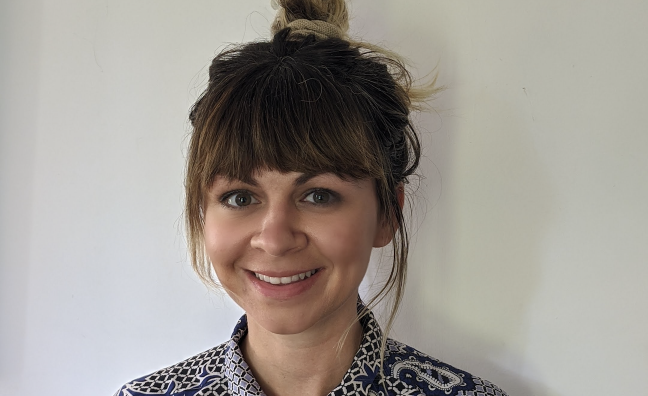 Charlotte Gunn has told Music Week that she hopes to change the landscape of music journalism with the launch of new online platform The Forty-Five.

In an exclusive interview, the former NME editor has opened up about the thinking behind her new publication, which will launch its first monthly digital cover story on June 17 and has an all-female base of contributors.

“The mission of The Forty-Five is to give female creatives a platform, tell untold music stories and to help connect fans with their new favourite artist,” said Gunn of the website, which will house interviews, reviews, opinion and playlists.

The site was developed by Gunn’s former NME colleague Jo Weakley, while journalists including Leonie Cooper, Rhian Daly and Jacqui Swift are among its contributing writers. Jenn Five – who recently photographed The 1975 for Music Week’s cover – is among the photographers.

“Long-term, I want it to be a trusted destination for music fans around the world, providing hyper-local coverage about the scenes they’re immersed in,” said Gunn. “But for now, I’m just excited for people to see what I've been working on.

The Forty-Five will focus on new music and in-depth editorial rather than music news, while Gunn has assembled a team of tastemakers to curate weekly playlists, and is running a podcast series called Trash In The Attic.

Here, Gunn opens up about her new project, reflects on her time at NME and looks ahead to the future…

Have you listened to @alunaaa's banging track 'Body Pump' yet? We had a chat with her on going it alone, know-it-all producers and her mission to head up dance music. Link in bio for the full interview. . . . #dancemusic #alunageorge #newmusic #musicinterviews #thefortyfivechats

What are the driving factors behind starting The Forty-Five?

“I’ve pulled together a network of talented female journalists and photographers who make up The Forty-Five. Its aim is to tell music stories, through a different lens. The percentage of women working in music journalism is still embarrassingly low and it stands to reason that if music has been critiqued from a predominantly male perspective for decades, it's played a part in creating the male-dominated artist landscape we see today. Things are changing for the better, but within my corner of music, it's still a boys’ club, with sexism, bullying and an under-appreciation of female voices being the norm. Battling that is exhausting – it exhausted me – and gets in the way of the creative output. I wanted to make a platform where young female writers can be heard, have opinions and speak freely without all that bullshit. I am proud of the success I’ve had despite these challenges. I want to see a new generation of female writers achieve even more without age-old sexism holding them back.”

What kind of music media landscape are you entering into?

“It's incredibly challenged with publications and jobs under threat every day. A lot of publications that were once solely music-focused have diversified into new areas to try and attract more readers. There are a lot of blogs and zines run by brilliantly talented individuals, but they are lacking the industry experience to take them to the next level. I think we've found a niche. We're an entirely independent youth publication, with a slick aesthetic and a focus on trying to rebalance the industry. We've also identified the best journalists in music media to write for us and the best tastemakers to curate our playlists. Although there's an important message behind what we're trying to do, music is supposed to be fun, so we don't take ourselves too seriously.”

Several music publications are under threat at the moment, can you bring some good news?

“I hope so. It's hard to see peers struggling and I really hope everyone gets through this. Music media needs a diversity of voices and opinions otherwise it's pointless. I can't pretend to have all the answers. Quality journalism needs funding and we are no different, paid-for content is likely something we'll be moving towards long-term. For now, we are interested in working with brands aligned with our vision.”

How do you want The Forty-Five to impact the music business?

“We’re open to working on new ideas and formats to tell artists' stories. First and foremost, we are fans too, and we want to celebrate musicians we like and showcase acts who are getting overlooked by traditional media. If you can offer us access, we can create unique and beautiful content with your artists that isn’t swamped by ads and clickbait links. I am not pretending this is the only outlet for women to write about music, but aside from the editorial output, I want to create a supportive environment for female creatives to learn from each other. I’m excited to see how the conversation and focus start to shift.”

What are your main goals going into the launch?

“It’s simple, really: to connect with music fans and create content that they enjoy. For the labels and artists, I hope The Forty-Five becomes an outlet they want to be a part of and support. And for my contributors, to provide some faith there are still some people who value your work.

Does music journalism need to change?

“Yes. It needs to put music discovery and fandom at the forefront of everything it does and be more adaptable. There’s also an obsession with print being the holy grail. I get it – I like seeing my words on a page as much as the next person and I understand that reading an article on your phone will never be the same as reading a magazine. I really do get it. But we do need to move past it because young music fans have. There is still a place for print media – and it's something I'm considering – but as so many titles are proving, great journalism is great journalism, whether printed or on screen. Being adaptable is key and, as boring as it sounds, so is living and dying by the data. What are people reading? What are they not reading and what can you do better next time? My challenge is to make the emerging artist I know is something special interesting to people skimming headlines on a page. It’s something that often takes a few tries but when I’m passionate about something, I keep trying.”

What things are you taking from your time at NME into The Forty-Five?

“So much. NME was a brilliant place to learn about the industry as a whole and in the last couple of years we proved that a legacy media brand can have a bright future without a print product. There's still a draw of a front cover of a magazine, but actually we proved that a digital cover is equally as exciting a proposition for artists to share and has more reach. At NME, I worked with some incredible writers and I am a better writer and editor for it. We loved the work and that made the editorial better, because it was honest and authentic. But there’s also a lot of baggage that comes with a brand of that weight. It feels liberating to be starting from scratch, not held back by what people think you should or shouldn’t be doing and, for me, to not be burdened by the political and financial agendas of those at the top.”

Which artists are you most excited about covering?

“Female artists who don't fit traditional boxes. Our first cover star is the epitome of that, a smart, talented musician who has captured a generation with both her wit and knack for writing utterly devastating songs. It's important to note though, we don't just cover female acts. A lot of male artists have been really receptive to the idea of not being interviewed by another old white dude!”