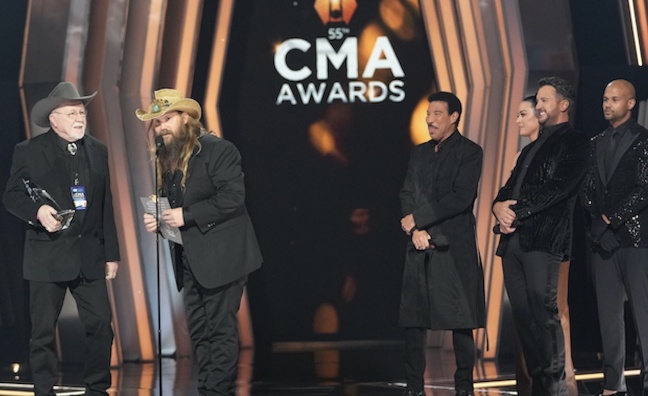 Luke Combs, who performed his single Doin’ This, received the night’s top honour of CMA Entertainer of the Year, a first for the artist.

Chris Stapleton was the night’s biggest winner, taking home four wins for CMA Album, Single, Song and Male Vocalist of the Year, while also being recognised for his work as a producer on his album and single.

Carly Pearce was named CMA Female Vocalist of the Year for the first time. Old Dominion continued their reign as CMA Vocal Group of the Year, having now won four years in a row.

“Country music as an artform has always been about storytelling, and this year’s CMA Awards broadcast, from performances to acceptance speeches, featured an incredibly wide range of stories – deeply personal stories, unifying stories, and fun and light-hearted stories,” said Sarah Trahern, CMA chief executive officer. “That is what makes this genre truly special, and we are so proud to have provided a platform for all of the incredible artists featured on this year’s CMA Awards to share their authentic selves with viewers around the globe. There was something poetic about returning to our home at Bridgestone Arena this year, and I am positive that I am not alone in wanting to relive the evening’s many magical moments.”

The winners of The 55th Annual CMA Awards are:

ENTERTAINER OF THE YEAR

SINGLE OF THE YEAR

ALBUM OF THE YEAR

SONG OF THE YEAR

FEMALE VOCALIST OF THE YEAR

MALE VOCALIST OF THE YEAR

VOCAL GROUP OF THE YEAR

VOCAL DUO OF THE YEAR

MUSICAL EVENT OF THE YEAR

Half of my hometown – Kelsea Ballerini (featuring Kenny Chesney)

MUSICIAN OF THE YEAR

MUSIC VIDEO OF THE YEAR

Half of my hometown – Kelsea Ballerini (featuring Kenny Chesney)

NEW ARTIST OF THE YEAR