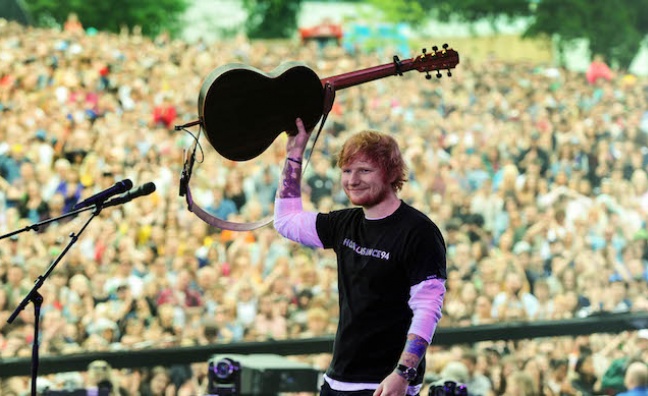 Ed Sheeran, Taylor Swift, Florence + The Machine, Liam Gallagher and Noel Gallagher’s High Flying Birds are among the artists to have seen a significant boost from The Biggest Weekend.

According to Midweek chart figures from the OCC, televised performances from the UK-wide festival have made a notable impact on sales.

Ed Sheeran’s opening performance at the Radio 1 event in Swansea on May 26 was screened in full later that evening on BBC One and scored ratings of 2.48 million (a 17.5% audience share). While ÷ moves 6-8, its week-on-week sales are actually up by 39.9%.

Taylor Swift’s six-song performance in Swansea was screened live on BBC One on Sunday (May 27) and the slot (which also featured Paloma Faith) had ratings of 2.4m. Swift’s album Reputation moves 34-23 with a 42.8% sales increase.

Florence + The Machine’s BBC Two performance, which came ahead of next month’s new album, has had an immediate impact on the catalogue. How Big How Blue How Beautiful re-enters the chart at No.86, Ceremonials moves 139-67 with weekly sales up 90.2% and debut LP Lungs soars 107-32 with a sales lift of 141.2%.

Sam Smith, who also featured on BBC Two, sees his sophomore album The Thrill Of It All move 39-30 on increased sales of 20.5%.

The sheer scale of the Biggest Weekend means that many of its performers appear on this week’s chart. Snow Patrol, who performed as part of the Radio 2 line-up in Coventry, are currently at No.1 in the Midweek with opening sales so far of 26,400 for comeback album Wildness. Shawn Mendes, who performed in Swansea, is at No.3 with his self-titled album on opening sales so far of 16,417.

Current Top 10 albums to benefit from a Biggest Weekend boost include George Ezra’s Staying At Tamara’s (it slips 5-6 but sales are up 30.1%) and Anne-Marie’s Speak Your Mind (a non-mover at No.10 with sales up 24.8%).

In the singles chart, the Biggest Weekend also appears to have benefited Anne-Marie – sales for 2002 are up 12.5% as it advances 4-3. Jess Glynne’s I’ll Be There moves 6-5 with sales up 29.3%, while George Ezra’s Paradise rebounds 8-6 thanks to a 4.8% increase. Clean Bandit’s Solo returns to the Top 10 with sales up 25.4% following the band’s appearance on BBC Two.