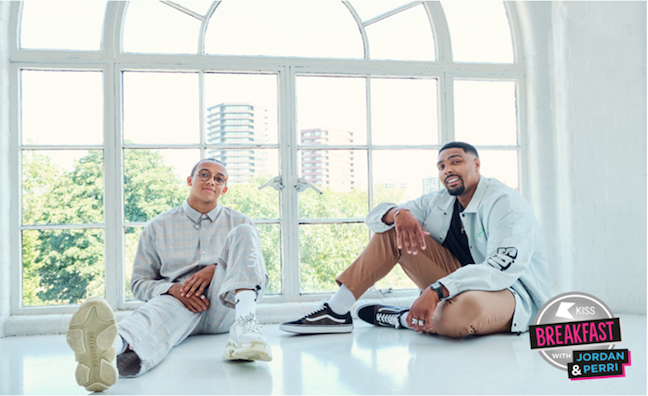 Kiss has a new breakfast show launching at a time of intense competition for morning listeners.

Perri Kiely and Jordan Banjo (pictured, left to right), best known as members of Britain’s Got Talent winners Diversity, go live on Monday (August 3) at 6am.

“For me and Perri growing up, Kiss Breakfast was the iconic show,” said Banjo.

“We've always been best friends,” said Kiely. “So it's really nice to find something where that crosses over and is so similar to our everyday life.”

The pair are interviewed in the latest edition of Music Week, along with Kiss network content director Rebecca Frank. She is confident that their chemistry can pay off for the station.

“The best formula for breakfast radio is to be authentic,” said Frank. “I think that’s what we’ve got in Jordan and Perri. The energy and aura around them is just so attractive.

“The fact that we have two best friends, who will be there as a duo long after Kiss has gone from their life, I think that already stands us in good stead in terms of being different and able to have that really genuine conversation in the morning.”

Kiely and Banjo have become familiar media figures, alongside their work in street dance troupe Diversity.

Frank said the show wouldn’t set out to grab headlines as a way of getting ratings early on.

“I don't think that it's in the boys’ nature to be provocative for the sake of it, we're not going to be a sort of clickbait-driven programme,” she said. “The authenticity and realness is the most important thing to us. What we have in our arsenal are two people who only know how to be [real]. So, if there is an opinion that they have, if they do want to talk about Black Lives Matter, if they do want to take a moment to share that they're feeling happy, sad or however they are that day, that will be our [breakfast] brand in terms of being different and unique.”

The best formula for breakfast radio is to be authentic

“Of course, we want to get everyone's day started right,” said Banjo. “We want everyone to have a good time and start off in a good place. But at the same time, there's a lot going on in the world. I think that’s a big part of our show, and what Kiss allows us to do is just be 100% real. So when those issues [of racism and diversity] are about, like they are, I feel like you have to really go out of your way to avoid them.”

“It’s the freedom just to be able to talk into the mic and speak about what’s right,” said Kiely.

Ratings for Kiss Breakfast declined during the 18-month partnership of Tom Green and Daisy Maskell. Following the shake-up of the schedule, Daisy Maskell has landed a new breakfast show on Kiss Fresh.

Frank is confident that ratings will revive under the new duo. The station also faces tough competition from Global rivals Capital and Heart, who both made their main breakfast shows fully national last year.

“It is a crowded and competitive market, so we do want to stand out,” she said. “It's entirely realistic that we can rekindle previous brilliant ratings.”

While the duo do not have any obvious background in music, Banjo stressed that they would get involved in all aspects of the show. The pair already had a Sunday night show on Kiss.

“There’s a genuine input from me and Perri in every element of this show,” he said. “Obviously, a big part of that is the music and making features around our favourite songs. We want to really push the narrative that it’s not just a new breakfast show with a couple of wacky presenters, it’s about the music as well.”

A new Breakfast Banger feature will be an opportunity for labels to push new music, alongside other spot plays, as the station revamps its policy to move beyond being a playlist or nothing station.

Banjo is also expecting it to be key platform for artists, though the pandemic will restrict promo opportunities for now.

“On this show, as we've seen over the years with Kiss Breakfast, you get a range of artists from Anne-Marie to Katy Perry as well as movies stars coming in,” said Banjo. “It's such an amazing opportunity for me and Perri as presenters.”

Kiss was stable on 5.135m listeners in the Q1 RAJARs. While RAJAR was unable to complete a survey in Q2, Bauer Media’s own figures showed a significant boost in online listening.

With digital listening surging, the station will be hoping to pull in some of Kiely’s 1.4m TikTok followers to the breakfast show.

“I feel like we’re really heavily connected to all of that,” he told Music Week. “If the audience is there, why not bring them over and introduce them to radio if they're not already part of it?”

“With Jordan and Perri we've got the ability to not only reconnect with people who already know Kiss, but to acquire new people via their digital presence,” said Frank.

“Digital listening is going to be a massive part of breakfast, especially on a show where traditionally people are snacking for short periods of time.”

To read the Music Week interview, subscribers can click here.