'It's core strength is great artists and music': Jools Holland on the return of Later... 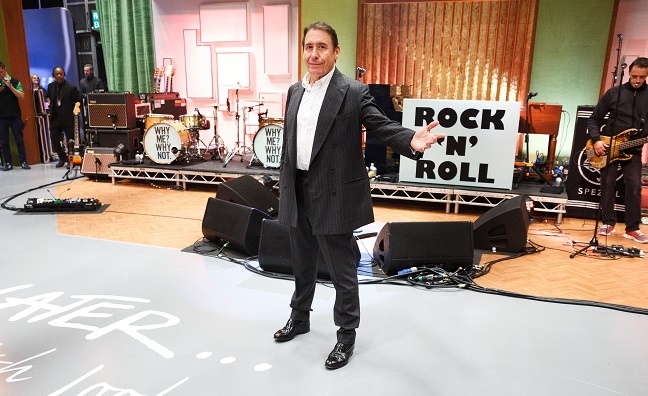 Jools Holland has spoken to Music Week about kicking off a new era for Later... ahead of the launch of its 54th series tonight.

The long-running show returns to BBC Two at 10pm tonight (October 17) and 11.05pm tomorrow following a 12-month sabbatical. Two pre-recorded episodes will air each week, running for 30 and 60 minutes respectively.

Later... has returned home to the refurbished Television Centre after six years in Maidstone, which will still host Jools’ Annual Hootenanny. In the most radical change to the format, Holland will be joined by a star co-host, who will perform and interview guests, with Mark Ronson taking the honours on tonight's series premiere.

“A lot of [people in] the industry were sad that we didn’t have a series in the spring, while we were regrouping,” said the presenter, speaking in the latest issue of Music Week. “But we’re back now and we’ve been commissioned for four series, so we’ll be on until [at least] 2021. We only got commissioned a year in advance before, so it’s great news.

"After so many years, there were a number of things we wanted and the BBC wanted, as well. They love the show and its principles, but they felt it was a bit dark, a bit late at night and a bit hidden – which was partly down to them – and they wanted it brightened up and reintroduced to get people talking about it a bit more.

"We also wanted to bring in co-hosts, who bring a different element each week. They will talk about the things they like and we’ll have a little more space in the hour show to have a bit more fun.”

“It’s very hard because everybody says, ‘Don’t change it, but we want it freshened up a bit’. So you’ve got to change it, but keep it the same, if you see what I mean," said Holland. "One of the things that Alison [Howe, executive producer] came up with was getting the co-host to pick a piece of their favourite archive. It’s like a treasure chest of the best performances and the best people ever."

He added: “I think the reason that Later’s stayed on is because it stays true to the music, and you want the music to be the entertainment. The mistake would be if they tried to make it too showbiz. Its core strength is great artists and music, and the fact that they’re being treated with regard. That’s why people want to come on, because we respect the art that they’re creating.”