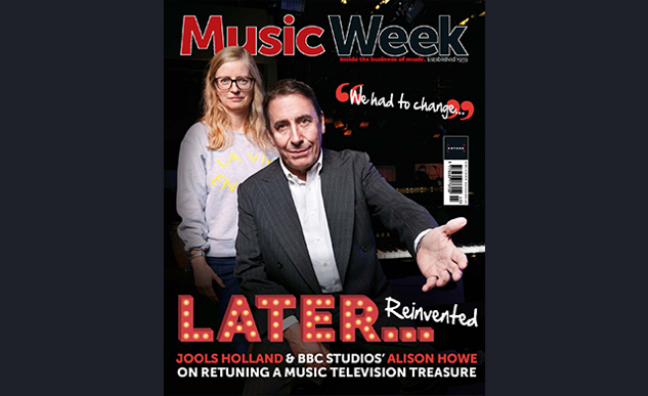 The new edition of Music Week goes behind the scenes at late night TV institution Later... With Jools Holland ahead of the premiere of its 54th series this week.

We speak to Jools Holland, BBC Studios’ executive producer Alison Howe and the BBC’s head of commissioning, music television, Jan Younghusband, as they prepare to kick off a new era for the long-running show.

Music Week checks in with white hot indie label Dirty Hit, home to the likes of The 1975 and Wolf Alice, for a chat with Jamie Oborne and his team, who reveal a few of the secrets of their success.

Elsewhere, in our essential quarterly analysis, we pick out the key trends from Q3 2019 and look ahead to the crunch Q4 period.

In this week's Big Story, we look back at last week's Music Week Tech Summit Together With O2 and run down the main takeaways from the event's panels and keynote speakers including Apple Music's Zane Lowe, Facebook's Vanessa Bakewell and Live Nation's Jackie Wilgar.

Freya Ridings shares the remarkable story behind her Top 10 smash Lost Without You in Hitmakers and Richard Davies, founder of face value resale site Twickets, recalls the music industry's early dalliances with technology in The Aftershow.

The latest installment of Audi’s collaboration with Faultline comes under the microscope in Sync Story, while teenage musical magpie Julien Chang is Making Waves.