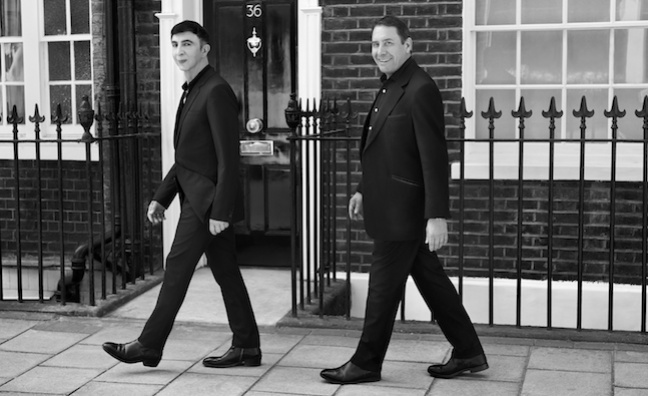 Jools Holland and Marc Almond are heading for the Top 40 with their new album, A Lovely Life To Live. It’s the latest in a long run of collaborations for the Later… With Jools Holland presenter, including records with Tom Jones, Ruby Turner and the 2001 multi-artist album Small World, Big Band, which has sales of 721,438, according to the Official Charts Company.

Holland and Almond have toured together occasionally since 2006. Their current run with the Rhythm & Blues Orchestra continues this week, including a show at the Royal Albert Hall (November 30 ). Here, Holland opens up about their musical partnership…

You’ve performed with Marc Almond regularly over the years, how did this album come about?

“We’ve been using the live audiences as our market research. Marc has been on three tours with us, maybe more. The great thing is that, like Ruby Turner, he is able to front an orchestra, he has that same power. A lot of people wouldn’t realise it, but he also loves the blues. He is a good person to have out with us, he always wins the crowd over. Over the years, we’ve done different songs. Our research has [involved] looking into the eyes of the people who have paid to come and see us. You can tell pretty quickly if something is working or something isn’t. Over the years we’ve honed down a repertoire, a canon of songs that work and have written a load too, and we thought we should make a record of it.”

What drew you to collaborating with him?

“When Marc is with us live, he brings something great to the show, because he’s got a couple of great hits but also he interprets songs in a great way. He can do quite a range of songs, too, so on the record there is an Edith Piaf song [Hymne A L’Amour] and then there are two Bobby ‘Blue’ Bland songs, one of which Drake [sampled] later on [on Take Care]. He suits the orchestra because of his versatility, really.”

Marc is able to front an orchestra, he has that power

You’ve also worked on a  new version of Tainted Love, the Soft Cell cover version that became their biggest hit…

“That’s right, it’s a great song. That comes from us playing it live. I hope people like it. There will be some purists that will sort of burst into tears. I think the main thing is that live, that drives people bananas. Based on playing it live, people really like that. We finish his part of the set with it and it goes really well. You can hear the power of the orchestra and you can hear the power of what we’re doing.”

You’ve been involved in numerous collaborations over the years - what do you enjoy about working with other artists?

“Well, I’ve been very lucky. We first worked with Marc [on Say Hello, Wave Goodbye], when we did the Jools Holland And Friends record, [Small World, Big Band, 2001]. That was back in the days when people still sold records! We surprised everybody, it was unbelievable. That was when I also realised that the great thing about the orchestra and having a big band, it’s nice for people to come and play with us, and to write with them sometimes. Also, to give them an opportunity to perform one of their songs, or give them an opportunity to sing a standard or a song that they always wanted to sing but couldn’t do in the confines of their own career. It gives lots of people an opportunity to do different sorts of music. Marc is the perfect example because he is the embodiment of all that. I’ve been very fortunate to work with really great people.”

To read the Music Week Aftershow interview with Jools Holland pick up the latest issue - or subscribers can click here. To subscribe and never miss a big industry story click here.