"It was busier than we could have ever imagined": Inside Record Store Day 2017 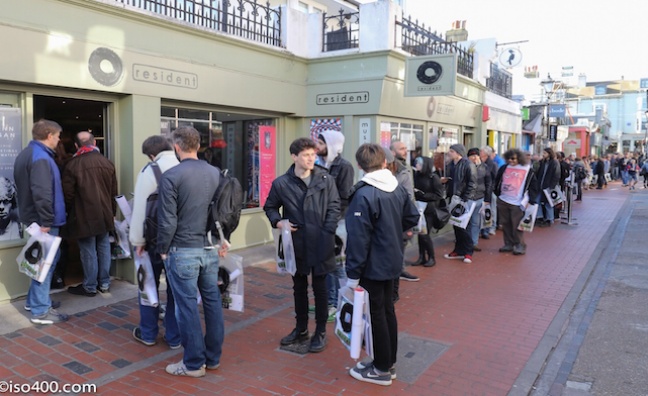 Independent retailers have hailed the 10th official Record Store Day – held on Saturday April 22 - as a huge success. One person leading the praise for this year’s event was Natasha Youngs, co-owner of Brighton independent record store, Resident. As pictured, the store boasted huge queues throughout the day from as early as 7am.

“Record Store Day proved to be busier than we could ever have imagined,” Youngs told Music Week. “It feels like we say this every year but this year was simply phenomenal. The atmosphere, excitement, camaraderie, humour, patience and joy amongst our customers was more astonishing than ever and the sales were substantially higher than last year. So much work goes into the planning and organising of the day, so to see it pay off in such a tangible way is such a buzz!”

“With the beginning of the queue in line at 7:30AM the day before, Record Store Day again took another step up,” agreed Jon Tolley, co-owner of Kingston’s Banquet Records – winners of this year’s Independent Retailer award at the Music Week Awards 2017. “We were about 15% up on last year when we thought that could never be beaten.”

As with previous years, 2017’s RSD saw a host of highly collectible releases drawing a lot of attention, with one in particular proving like gold dust at Resident.

“The release we could have done with loads more of was The The's You Can't Stop What's Coming  - their first new music in 15 years and a cracking track. But we knew that would be the case beforehand so we're just glad we had as many as we did,” said Youngs.

In terms of best sellers, Resident also reported that the usual vinyl heavy hitters also did big business all over again.

“The hottest sellers were The Smiths, all the Bowie releases, The Goldie / Burial 12", The Cure, Elastica, Pink Floyd, The Cribs, Sugar, Iggy Pop & Deee-Lite amongst many others,” added Youngs.

While recent figures have suggested that vinyl’s explosive growth is finally slowing down, and some in the industry claim RSD is merely a novelty, the independent sector begs to differ.

“It’s not just about finances,” said Tolley. “It’s about the appreciation of record shops too. And, in fact, that’s the most important part of it. The vibe was great, and the extended store [Banquet opened another shop for the day] meant it felt more organised and let us put on the in-stores without affecting the regular record shopper. The busy time for us around the RSD releases continues for weeks, if not months, and is further enforcement that every day is Record Store Day.

“I would urge all the haters and non-believers to come and experience the event first hand,” agreed Youngs. “It's about so much more than the records and the sales.”