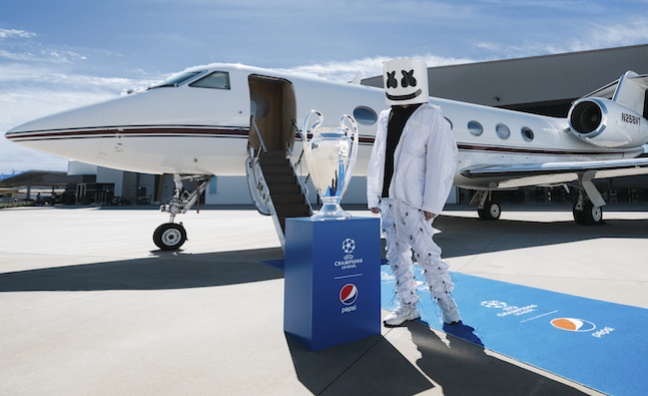 Marshmello has spoken to Music Week about the potential global impact of his performance for this weekend’s UEFA Champions League Opening Ceremony presented by Pepsi.

Marshmello will play a virtual six-minute spectacle using immersive technology ahead of the match at 8pm on Saturday (May 29) in which Manchester City play Chelsea at Porto’s stadium in Portugal. The game was moved from Turkey as result of Covid restrictions. It airs on BT Sport and its YouTube channel from 6pm.

Previous performers at the Opening Ceremony include Imagine Dragons and Dua Lipa. The event has a huge global TV audience.

Selena Gomez and Khalid are confirmed for the Opening Ceremony performance. They are two of Marshmello’s most successful collaborators: Wolves with Selena Gomez has UK sales of 844,105 (Official Charts Company) and Silence feat. Khalid has UK sales of 1,561,067.

“I hope it has a really big impact,” said Marshmello of this weekend’s performance. “There is a tremendous amount of planning and a lot of people took a lot of time out of their lives to make this happen.”

The DJ said he expects the performance (“a mix of all of my favourite songs that I've made”) to reach a huge audience. It follows his game-changing 2019 DJ set in Fortnite, the first live concert within the game, which drew an audience of 10.7 million.

“The Fortnite thing was so unique back when we did that,” he told Music Week. “That was a great opportunity. I think the impact that had in the gaming world is something that I would like this [Champions League] performance to have, too, on a much bigger scale. That's all I can hope for.”

Marshmello confirmed that he is working on an EDM album, and he shrugged off the constant suggestions that the commercial dance sub-genre might have peaked.

“It's just another genre of music,” he said. “I'm sure that back in the day, people said that rock music was just a trend. [EDM] is, genuinely, a genre that will always be around and will always have people going to shows.”

Marshmello suggested that EDM could even see a post-Covid live boom, following the severe impact of the pandemic.

“Me and my friends in the industry, and other big artists as well, when we get together and mull over the situation that the world is in, we always talk about maybe there's just going to be a huge wave of everybody wanting to go to every live show,” he said. “Nobody's been able to feel that for a long time. So [we hope] it will just be an influx of people.”

Despite his involvement in the Champions League Opening Ceremony, Marshmello admitted he doesn’t follow a team.

“I don't support anybody specifically but I do love soccer,” he said.