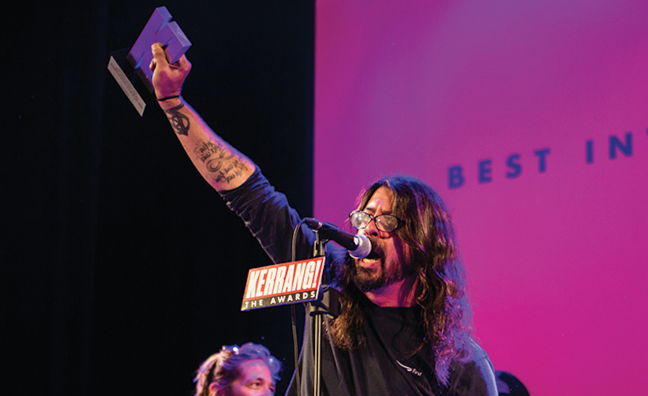 Metallica, Slipknot and Bring Me The Horizon are among the acts leading the nominations shortlists for the annual Kerrang! Awards. The ceremony will take place on Wednesday June 19 at Islington Assembly Hall.

The shortlists for this year’s event were decided by the public, with over 40,000 votes cast. Among the other acts rounding up the nominations are Iron Maiden, Ghost, Rammstein, Fever 333, Enter Shikari, Architects and Biffy Clyro.

Two of the nominated acts, Angel Du$t and The Interrupters, have also been confirmed to play two free shows in London on May 28 and 29 respectively as part of Kerrang!’s Pit series – which has previously hosted the likes of Mastodon and Parkway Drive.

As well as the voted-for categories, the awards ceremony will also see Kerrang! bestow a number of awards recognising career-long achievements. This will include the latest inductee into the Kerrang! Hall Of Fame and the presentation of the Kerrang! Inspiration Award.

Speaking about the launch, Kerrang! magazine editor Sam Coare said: “The nominees for this year’s Kerrang! Awards – which combine both the most exciting new talent shaping our scene’s future, as well as the pioneering legends who continue to play music on their own terms – simply underlines how incredible the modern rock scene is. It is personally particularly exciting to see the emergence of recent magazine cover stars such as Greta Van Fleet, Fever 333, The Interrupters, Swmers and Idles celebrated in this year’s awards shortlists. 2019 genuinely is a great year for rock music around the world.”

You can read the full shortlists below:

2 Slipknot – All Out Life

4 While She Sleeps – Anti-Social

5 Frank Iero And The Future Violents – Young And Doomed

2 Bring Me The Horizon – Amo

4 Behemoth – I Loved You At Your Darkest

3 Frank Carter And The Rattlesnakes

3 Bring Me The Horizon

4 Panic! At The Disco