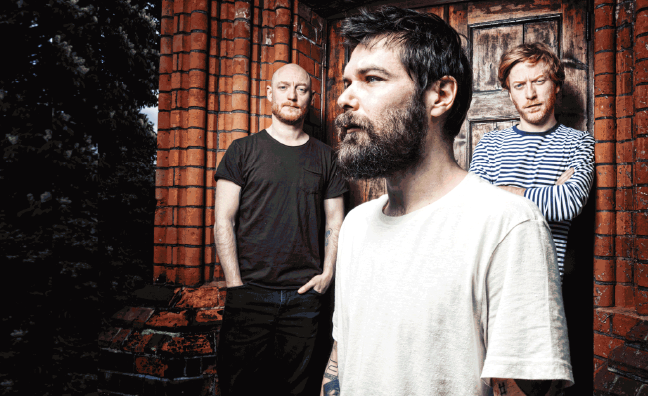 Last Friday (May 17), rock titans Biffy Clyro surprise-released Balance, Not Symmetry – a brand new 17-song album – via Warner Bros. Recorded as a soundtrack for an upcoming film of the same name directed by Jamie Adams, the release was made available for streaming only – at the time of writing, its title track has already racked up 357,988 streams on Spotify alone.

In 2018, Music Week (politely) interrupted Biffy Clyro while they were making Balance, Not Symmetry at London's AIR studios in order to speak to them about their MTV Unplugged tour. Naturally, we took a moment to ask about what they were recording, too. Here, in an unread extract from that interview, Biffy vocalist/guitarist Simon Neil opens up about the surprise soundtrack…

How did the soundtrack come about?

Simon Neil: “Basically, the director Jamie got in touch with this idea about us making a record and him making a movie as a reaction to the record. Immediately, it piqued our interest. It’s such an unusual way of doing things; as you know, the music and soundtrack always comes after the film’s made – that’s what leads it. This time the album is leading the movie. We’ll complete the music, which will then be played as the actors are preparing for scenes, and in the scenes. It’s really unusual and it was evolving constantly. It’s not a score. Quadrophenia was one of Jamie’s touchstones, in that it was made before the movie. That’s one of the only examples we can find of music being made first. That’s where his touchstone was. It’s all going to be song-based.”

Why present it as a Biffy album?

“Jamie had done a lot of research and spent a lot of time with our music, and I’ve since found out our music played quite a big part in his life growing up and in his development. He’s a good man. It felt right to do that, because I’m interested in doing scoring at some point in my life, but this didn’t feel like that. This wasn’t a score, this was Biffy making music. It was really a no brainer. We talked about it for a month or two and then it started to come together. The more albums you make as a band, it’s about trying to look for different inspiration points. I don’t want to keep just making albums because it’s another two years.”

The soundtrack always comes after the film’s made – that’s what leads it. This time the album is leading the movie...

That’s a trap some bands fall into…

“You need to make sure you’ve got something to say, and give people a reason to fall in love with something. It becomes so ‘product’ like, and the tough thing in this day and age – just because of the nature of streaming, which is great – is the art of the album is a different beast. You have to go away and love it and feel it. The tough thing at the moment for bands and artists who concentrate on making records is that there’s a lot of pressure to keep bringing stuff out. The amount of bands who say, ‘Well never make an album again,’ and then two years later they go, ‘Oh right, the five songs we put out didn’t work out – we’re going to do an album’. Because that’s why you start making fucking music. People that want to play instruments and make their own music don’t just want to make pop music, we start making music for the opposite reason of that ‘one song’ mentality. I don’t want to do it just because it’s time to either pay the bills or get the crew out on the road or we’re sat twiddling our thumbs. There needs to be a spark.”

Biffy has never lacked that so far…

“No. That’s my biggest fear as a band and I would never let that happen. That’s why Ellipsis took longer, you’re kind of at the mercy of the songs. I feel it’s a bit hippyish and romantic to say it, but who knows what the muse has in store?”

So is the Ellipsis chapter of your careeer done?
“Yeah, that’s over. What I hate most – and this is why I make sure that on every album we have purpose and something to say – is when you see a band two years after they’ve been bigging up their new album and they’re like, ‘Actually… We weren’t in the right headspace, I never really connected with it.’ It’s like, what the fuck were you doing? Why bother? There’s enough music in the world, we don’t need another album of mediocrity. It’s about trying to keep that balance, keeping the naivety of being that 15-year-old when you were waiting for a record to come out and to press play.”

Speaking to Music Week, Jennifer Ivory, general manager, UK, Warner Bros further explained the decision to surprise release the soundtrack, and what we can expect next in terms of its roll-out.

“We wanted Balance, Not Symmetry to be an surprise release on DSP’s only to coincide with the film’s official trailer coming out,” said Ivory. “Biffy wanted to get the music out quite a bit before the film was released so their fans could live with the music first and therefore add context to film when they see it later in the summer. As it’s not a conventional Biffy Clyro album, we thought it was best to let the music live in the streaming world first. We plan on having a companion double vinyl release when the film in theatres in July as we know the core fan base have a desire to complete their Biffy vinyl collection.”