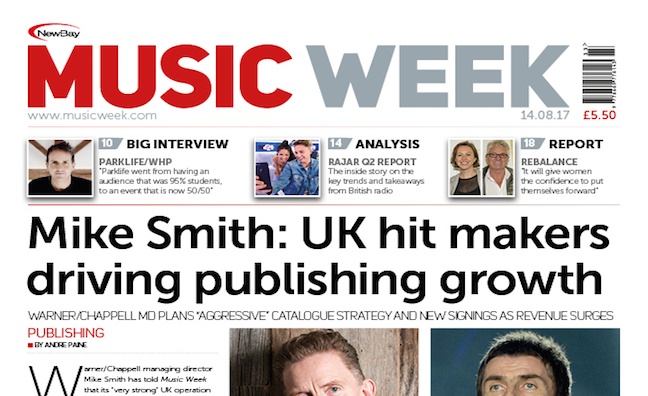 The new issue of Music Week is out now, and our cover story sees Warner/Chappell UK MD Mike Smith discussing the publisher’s “aggressive” catalogue strategy and new signings after a Q3 revenue surge.

In this week’s Big Interview, Parklife/The Warehouse Project founders Sacha Lorde-Marchionne and Sam Kandel talk about their journey from upstart promoters to the heart of the Live Nation UK empire.

We also speak to Festival Republic MD Melvin Benn and PRS Foundation CEO Vanessa Reed about their brand new ReBalance initiative, which is set to help redress the issue of gender inequality in the music biz.

Elsewhere, rising rock group PVRIS and their management team tell Music Week how they made the most of their chances to become a worldwide phenomenon ahead of their second album. DawBell also give us the lowdown on their Music Week Award-winning campaign for Craig David and his chart-topping Following My Intuition album.

In the news section this week AIM CEO Paul Pacifico reacts to the association’s awards nominations for 2017, Association Of Independent Festivals general manager Paul Reed discusses a tough week for the festivals sector and we hear the latest from Communion as they sign indie band Peace on a new publishing deal.

On The Radar this week are Rhode Island rockers Downtown Boys, while Martini and Paolo Conte take the Sync Story slot.

Plus there’s all the very latest news, charts and analysis.