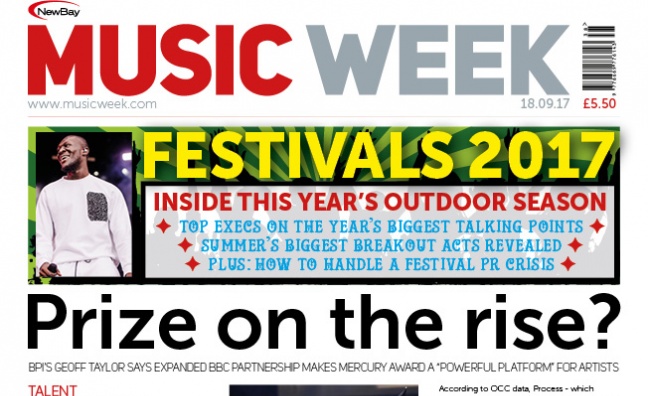 This week's Music Week is out now and is a festivals special, as we look back at the lessons that can be learned from an eventful 2017 season.

In the Big Interview slot, we speak to top execs from Glastonbury, Isle Of Wight Festival, Download, Slam Dunk Festival and Standon Calling on the ups and downs of the summer in our roundtable discussion, while experts advise on how to cope with a festival PR disaster.

Plus: we round up the summer’s biggest breakout acts and Team Dua Lipa explain how the pop sensation became a festival smash.

Elsewhere, in our cover story, BPI chief executive Geoff Taylor declares the Mercury Prize has “bounced back” as Sampha celebrates his big win and the biz looks for a sales boost to the featured albums.

There’s also news of Sam Smith’s huge comeback as retail gets ready for a monster Q4, Warner unveils its Leading Ladies project and we speak to the duo behind a new global publishing JV with Sony/ATV.

US teenage pop sensation Khalid is featured in On The Radar, while Sync Story gets the inside track on Daughter's collaboration with Square Enix on the new game, Life Is Strange: Before The Storm. And there’s also all the usual news, charts and analysis.

The issue is available in all good newsagents now. To subscribe and never miss a big music biz story, go here.