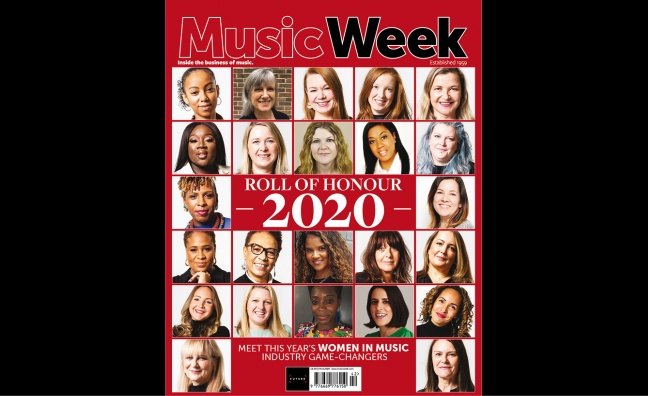 The new issue of Music Week is out now and it is another very special edition, as we reveal this year's inductees to the Women In Music Roll Of Honour.

While this year’s Music Week Women In Music Awards, in association with AIM and UK Music, were unable to take place due to the Covid-19 pandemic, we were more determined than ever to celebrate the achievements of female executives across every sector of the industry.

The class of 2020 is an expanded list featuring 24 names in all - 12 of whom are interviewed in this issue, with the remaining 12 to be profiled next week.

In addition, we catch up with retailers and record execs in this week's Big Story, as the biz preps itself for a “Q4 like no other” to bring the curtain down on an extraordinary year.

Also in news, we speak to the team behind the Virgin Money Unity Arena in Newcastle, who reflect on the success of the UK's only major concert series of the summer and discuss the chances of it returning in 2021. Plus, RCA president David Dollimore speaks of the label's lofty ambitions for Nothing But Thieves' third album Moral Panic, which drops this Friday.

In addition, we present a Viewpoint from Music Venue Trust CEO Mark Davyd. In his debut Music Week column, Davyd explains why the battle to protect the grassroots network is far from over despite dozens of venues receiving funding from the government’s £1.57 billion Culture Recovery Fund.

Elly Jackson revisits La Roux's 2009 smash Bulletproof - given a new lease of life courtesy of its recent resurgence on TikTok - in Hitmakers, while US songwriting royalty Diane Warren takes on The Aftershow.

Elsewhere, rising rap star Ivorian Doll takes to the floor in On The Radar and Red Light Management's Caroline Trout discusses her career so far in Rising Star.

BBC Asian Network broadcaster DJ Firestarr offers his tips for the top in Tastemakers and New Zealand-raised rapper Chaii is Making Waves, while Charlie Puth's hook-up with new fantasy film The One And Only Ivan is explored in Sync Story.

The issue is available now. To order your print copy of this very special issue, email musicweek@abacusemedia.com. To subscribe to Music Week and never miss a vital music biz story, click here.