Inside some of the biggest albums still to come in 2020 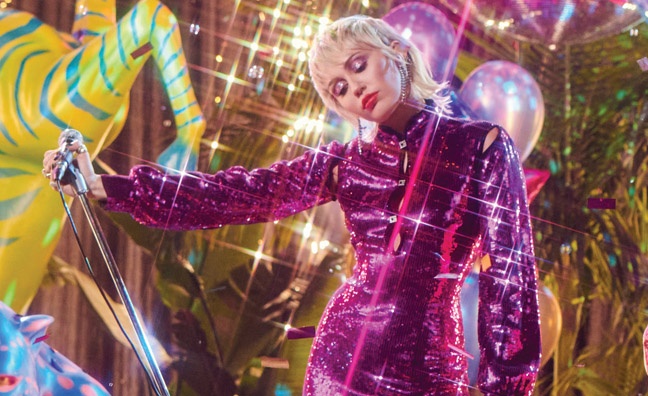 It has been a tumultuous, unpredictable and – yes, that oh-so defining word of 2020! – unprecedented year in music. But at least there’s one thing you can count on: a blockbuster Q4. In the latest issue of Music Week we bring you your essential guide to the key releases that everyone will be talking about in the coming months. From majors to indies, frontline to catalogue, and breaking acts to absolute legends, they’re all in line to release records, here is your essential guide to the next three months! Here, we take an inside look at some of the big releases coming your way from Universal Music and Sony Music, from Miley Cyrus and Sam Smith to AC/DC and Dizzee Rascal...

Miley Cyrus returned with Midnight Sky in September, her first single taken from her new album out in November. Midnight Sky peaked in the Top 10 singles charts, her highest-charting single since Malibu
in 2017, while also holding the No.1 Airplay position for four weeks. She also performed on The Graham Norton Show and BBC Radio 1’s Live Lounge.

Gary Barlow returns with his first solo LP since 2013’s Since I Saw You Last. Music Played By Humans, an album of original compositions, sees Barlow add a modern take to the orchestral and big band music he fell in love with as a child. It includes the single Elita with Michael Bublé and rising Latin star Sebastian Yatra, plus tracks recorded with an 80-piece orchestra.

Off the back of The Architect, which sold more than 450,000 copies, one of the UK’s most successful female singers and BRIT Award winner Paloma Faith is back with her forthcoming fifth album, Infinite Things. The album’s first single, Better Than This, pulls back the curtain and unveils what she has been so passionately creating over the last couple of months during lockdown. Infinite Things is due in November and Faith is already set to feature across a lot of autumn and Christmas TV schedules this year.

The Grammy, BRIT, Golden Globe and Oscar-winning Sam Smith returns with a new record. Their highly anticipated third offering builds on the 30 billion career streams they have amassed and the global success of their debut and sophomore albums, both No.1, multi-platinum-selling records in the UK and US. For this LP, Smith has enlisted long-term collaborator Jimmy Napes to bring together a curated collection of songs written over the last two years, all displaying individuality with each one telling a different story. Including the recent My Oasis with Burna Boy, Love Goes also sees other former collaborators return to feature on this eagerly awaited record.

What can you say about the biggest girl band in the world? More than 20 Top 20 singles, double BRIT Award winners, 50 million-plus worldwide sales and one of the most streamed acts ever, Little Mix are back with their sixth studio LP, Confetti. Full of pop joy and goodness, Confetti sees the girls make a triumphant return, evidence of which is already clear with the Top 10 single Break Up Song and latest release Holiday. Confetti is the first record released on RCA and looks set to continue Little Mix’s ever-growing success. Not content with taking over the charts, the band’s new BBC1 prime time television show, The Search, is now on air, ensuring the girls are on television screens every Saturday night around the album’s release.

Bruce Springsteen’s new studio album with the E Street Band is a rock album fuelled by the group’s heart-stopping, house-rocking signature sound. The 12-track Letter To You is Springsteen’s 20th studio album and was recorded at his home studio in New Jersey. Letter To You includes nine recently written Springsteen songs, as well as new recordings of three of his legendary, but previously unreleased 1970s compositions.

AC/DC return with their brand new record Power Up, which is their first studio album in six years since Rock Or Bust. Having sold millions of albums worldwide, the band continue to be one of the most successful and legendary bands in history.

A 7” singles box set comprising all of Amy Winehouse’s incredible singles, featuring Stronger Than Me, Rehab and Love Is A Losing Game, all of which won the Ivor Novello Award for Winehouse in 2004, 2007 and 2008. The set also includes the Grammy Award-winning Body And Soul, a poignant collaboration with the legendary Tony Bennett.

The last two years have been an impressive journey for Fredo, with him being no stranger to chart success. His sophomore LP, Money Can’t Buy Happiness, was executive produced by Mercury Prize winner Dave. With an impressive list of features on the album, including Summer Walker, Pop Smoke and more, he will undoubtedly continue to set the UK rap scene on fire.

Since exploding onto the scene, Yungblud has brought his rebel-minded, hip-hop-infused rock’n’roll to an ever-growing legion of fans and built a one-of-a-kind bond with his young audience. Weird! follows 2019’s The Underrated Youth EP, which debuted in the Top 10 on the UK albums chart.

Joy Crookes is one of the UK’s most exciting new female talents. At only 21, her songs effortlessly capture life’s trials and tribulations. Born and raised in South London, Crookes’ musical journey is still just beginning but she’s already garnering Amy Winehouse and Lauryn Hill comparisons. The daughter of a Bangladeshi mother and an Irish father, she grew up listening to a mix of musical genres – and as a result she’s curious, passionate and culture obsessed. Crookes has a magnetic personality – her witty, honest approach to everything she does gives her that extra sparkle above and beyond just her music. Whether through socials, her lyrics or live, she has an ability to be relatable to anyone she comes into contact with. Having spent much of 2020 writing and recording, she will be releasing her debut album in 2021.

Seventeen years on from Boy In Da Corner grime pioneer Dizzee Rascal releases E3 AF, his seventh studio LP, a nod to the postcode of his roots in Bow, London and his most exciting release to date. The 10-track album marks his first wholly written, recorded and produced in the UK in over a decade and includes a feature list that reads like a who’s who of UK rap.

The new edition of Music Week is our jumbo-sized Q4 preview special as we look forward to the biggest releases coming our way between now and the end of the year from Universal, Sony, BMG, Concord and Now That's What I Call Music...

We welcome the legendary Kylie Minogue to our cover as the pop icon prepares to return with her new album Disco. Subscribers can read the full interview here.