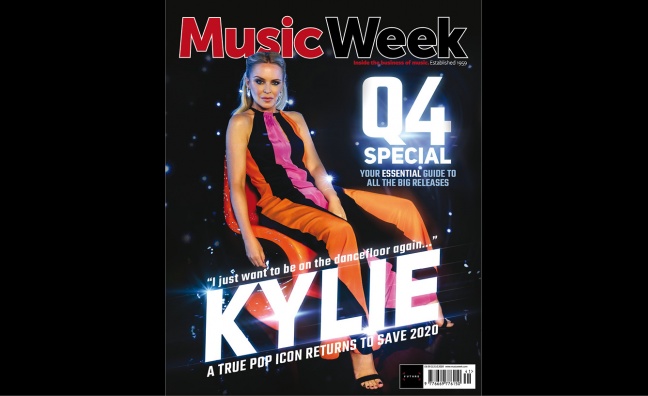 The new edition of Music Week is our jumbo-sized Q4 preview special as we look forward to the biggest releases coming our way between now and the end of the year.

We welcome the legendary Kylie Minogue to our cover as the pop icon prepares to return with her new album Disco. We catch up with the star and her team at BMG and A&P Artist Management to talk streaming, social media and her return to the dancefloor.

The interview is a precursor to our epic run-down of the releases to look forward to throughout the quarter from across the major and independent sectors. Everything you need to know about the biggest three-month period in music is here.

While setting the scene for the future, we take a look back at the immediate past with our unrivalled and exclusive Q3 analysis. Music Week crunches the numbers, gives insight into the latest trends and quizzes top label execs on the biz’s big comeback from one of the most difficult quarters in the music retail history.

We delve into the live business once more in this week's Big Story, as we speak to The O2's VP and general manager Steve Sayer after the London arena announced plans to reopen with a socially distanced show by Squeeze in December. In an in-depth interview, Sayer sets out a road map for the return of full-capacity events in 2021 and shares his thoughts on how the sector can withstand the challenges of the next six months.

Elsewhere in news, BBC Radio 1 head of music Chris Price argues why its Brit List is more important than ever during Covid-19 as the station unveils a bumper Q4 line-up, and 24kGoldn's US label boss Barry Weiss gives the inside story on how streaming enabled the rapper's genre-blurring single Mood to become an international smash.

Clean Bandit's Grace Chatto takes centre stage in Hitmakers to discuss the making of the group's massive 2016 Christmas No.1 Rockabye, which featured Sean Paul and Anne-Marie, while in The Aftershow, Moloko singer turned solo artist Róisín Murphy reflects on her career so far in the wake of the release of her new album Róisín Machine.

In addition, Jvke's soundtracking of TikTok's Starts On TikTok campaign in the UK is the feature of our latest Sync Story and the BBC's Jem Stone divulges his favourite new sounds in Tastemakers.

Alongside all that, we bring you the very latest charts, news and analysis.

The issue is available now. To order your print copy of this very special issue, email Rachael Hampton at rachael.hampton@futurenet.com. To subscribe to Music Week and never miss a vital music biz story, click here.