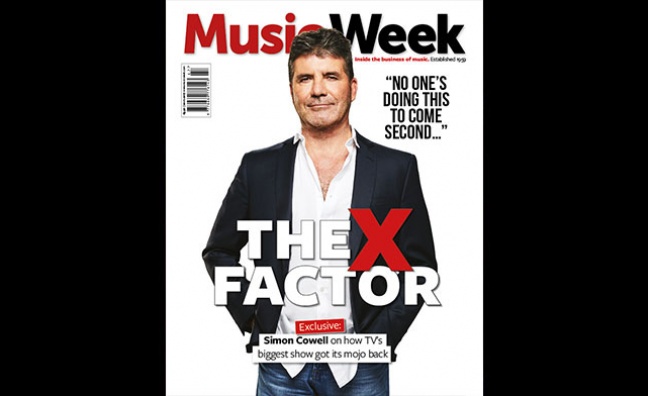 The new edition of Music Week is out now, and music biz kingpin Simon Cowell heads up our cover story on The X Factor, where we go behind the scenes on music TV’s biggest show.

The 14th series of the ITV institution is hotting up, and Music Week was on set to talk exclusively to Cowell, fellow judge Louis Walsh, as well as Syco MD Tyler Brown and Simon Gavin, the label’s global head of music.

All four discuss breaking new acts, music television, the impact of streaming and much more.

This week’s Big Story is, of course, Taylor Swift. As the industry reflects on a monster global first week for the star, Music Week investigates the impact of her decision not to make Reputation available to stream.

Also in news, Polydor co-president Tom March tells the story behind Elbow’s Christmas sync for John Lewis, while we have the latest on Waxploitation’s expansion into the UK market from founder Jeff Antebi.

Elsewhere in the features section, we bring you comprehensive coverage of the Music Week Women In Music Awards 2017, with exclusive photographs and each and every winner’s speech. Dive in, and relive the fourth edition of the music business’ most exciting awards ceremony.

As well as all that, we meet Brooklyn-based shoegazers Cigarettes After Sex to find out how they became an international touring behemoth after their 2012 track Nothing’s Gonna Hurt You Baby exploded on YouTube in 2015. We speak to Partisan Records MD Zena White, manager Ed Harris, Martin Mackay of Primary Talent and Blue Raincoat Music CEO Jeremy Lascelles, who signed the band to his company’s management division in the summer.

In this week’s Hitmakers, we get the lowdown on The Darkness’ No.1 smash I Believe In A Thing Called Love, while MOBOs founder Kanya King takes on The Aftershow ahead of this year’s awards ceremony in Leeds.

On The Radar is Britain’s Got Talent winner Tokio Myers, who tells the remarkable story of his rise to fame and reveals how he plans to take classical music to the masses. Meanwhile, in the Making Waves slot are up and coming Norwegian pop trio Sassy 009.