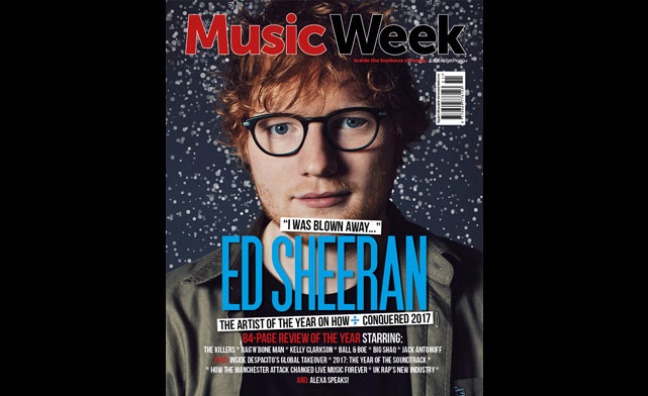 In the new issue of Music Week, we bring you our absolutely mammoth look back at the incredible year that was 2017.

And what better place to start than by speaking to Music Week’s Artist Of The Year winner: the all-conquering Ed Sheeran? In our huge cover feature, we speak to manager Stuart Camp, Atlantic president Ben Cook, Sony/ATV boss Guy Moot and none other than the man himself to tell the incredible inside story of ÷.

Elsewhere in the features section, Music Week’s Breakthrough Artist Of The Year, Rag’N’Bone Man – and his Columbia team - spills the beans on smashing through the glass ceiling, staying true to himself and hugging Whoopi Goldberg. We also have The Killers frontman Brandon Flowers, drummer Ronnie Vannucci and the crack team around the Anglophile Americans discussing why the band’s special relationship with the UK is built to last. Music Week also catches up with pop superstar Kelly Clarkson to find out about her new album, Meaning Of Life, and how she is thrilled to be on her new label Atlantic.

All of that, however, is just the tip of the iceberg. In a special report we look at how the horrific attacks in Manchester and Las Vegas, following on from the Bataclan atrocity two years ago, have put venue security under the spotlight like never before, with a handful of live experts weighing in on how the business has changed in 2017.

Plus, Music Week gathers the teams behind Stormzy, J Hus and Wiley to take an in-depth look at how British MCs have made a huge impact on 2017, tearing music industry traditions apart while bursting further into the mainstream than ever before. Elsewhere, we look at the rise and rise of film soundtracks in 2017, with interviews with the execs behind La La Land, Moana, Star Wars, Guardians Of The Galaxy and more. And, with millions of music fans unwrapping smart speakers this Christmas, labels are banking on voice control driving the subscription market forward. Music Week looks at the potentially huge impact of interactive AI in 2018.

Legendary British exec Rob Stringer had a stellar year, graduating to the top job at Sony and winning the MITs Award. He shares some of the lessons he learned along the way in this week’s Aftershow.

We also round up the best quotes and photos of the year and speak to top execs in the biz to find out about the highs and lows of their 2017, as well as their favourite albums and tracks. Speaking of which, Despacito by Luis Fonsi, Daddy Yankee and Justin Bieber, was the biggest song of the year – and a genuine mould-breaker for the Latin scene. Music Week tells the full story of its reggaeton revolution. As if that wasn’t enough, we also get the Kings Of Christmas Ball & Boe to give us their thoughts on some of the year’s biggest songs, from Taylor Swift to Kendrick Lamar and Stormzy and Charli XCX. We also take a look at what impact new OCC rules had on speeding up the charts and generating new hits.

And while we’re still on the topic of smash singles, if you wanted a hit in 2017, you went to Jack Antonoff. Working with Taylor Swift, Lorde and more, the Bleachers frontman wiped the floor with the competition. In a Hitmakers special, Music Week unravels the genius behind our Songwriter Of The Year.

There’s all of this and much more, plus all the very latest news, analysis, charts coverage and market share statistics.

The bumper new issue is now available in all good newsagents. To subscribe and never miss a vital music biz story, click here.