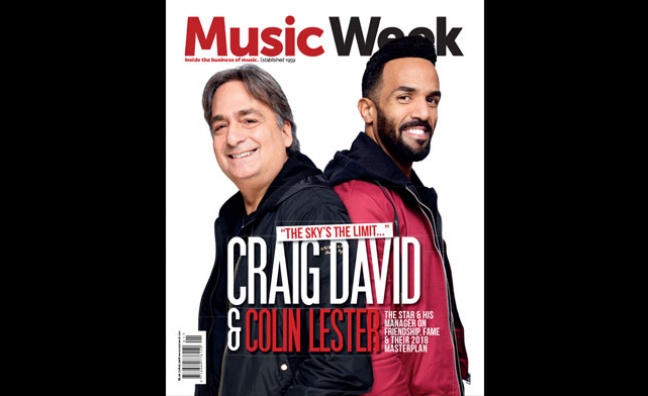 In the new issue of Music Week, we kickstart 2018 with one of the first big UK artist campaigns of the year. Craig David and long-time manager Colin Lester sit down to chat for an extensive cover feature that looks at the rise, fall and rise again of the UK garage and R&B star as he launches new album The Time Is Now. It’s a music business story that takes in fast cars, a spell in the wilderness DJing in Miami and a triumphant No.1 comeback.

Elsewhere in the features section, Music Week sits down with Craig Jennings, founder/CEO of rock management powerhouse Raw Power, to talk about his plans for bands including Bring Me The Horizon, Bullet For My Valentine and punk legends The Damned, as well as his thoughts on how rock and metal can make more of an impact on streaming platforms.

Also in this issue, we also have an exclusive interview with Zane Lowe. As Beats 1 approaches its third anniversary, the former Radio 1 DJ explains how the shows will more closely integrate with Apple Music to help break artists and drive growth on the tech giant’s streaming platform.

Talking of growth, UK recorded music has marked its third consecutive year of sales increases. With the biz now officially bouncing back, The Big Story this week looks more closely at the numbers behind the streaming boom and quizzes the BPI’s Geoff Taylor and ERA’s Kim Bayley about where we go from here.

Following his New Year’s Eve concert celebration live on BBC One, Nile Rodgers is in the hot seat for this week’s edition of The Aftershow. As you’d expect from a music legend who presented a BBC TV series titled Nile Rodgers: How To Make It in the Music Business, there’s plenty of wisdom about the biz based on almost five decades of success as a member of Chic and recordings with star collaborators including Daft Punk, Duran Duran and Madonna. But as he explains, David Bowie was the artist he really wanted to hook up with one more time…

For this week’s Hitmakers interview, Jon Shave of production trio The Invisible Men (who have racked up 1.5 billion combined streams on Spotify alone) takes us inside the making of Fancy by Iggy Azalea and Charli XCX.

There’s all of this, plus the very latest news, analysis, charts coverage (including all the rundowns from the final weeks of 2017) and market share statistics.

The new issue is now available in all good newsagents. To subscribe and never miss a vital music biz story, click here.