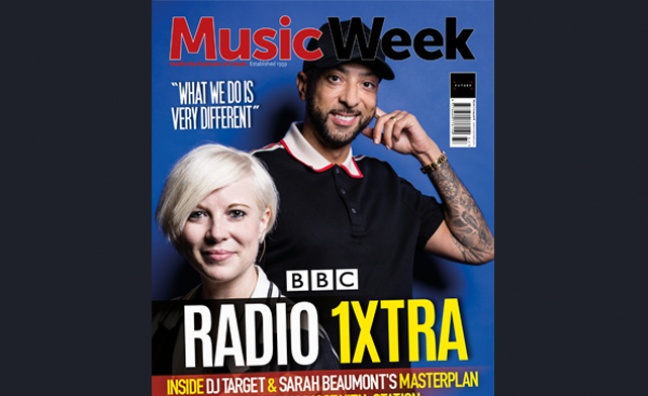 The BBC Radio 1Xtra duo of DJ Target and Sarah Beaumont reveal their vision for the UK's most vital station in the new issue of Music Week.

We join the pair at 1Xtra HQ to talk new music, taking risks and a cultural revolution in this week's cover story.

After the European Parliament voted in favour of the new Copyright Directive, the UK music business warns the "real work begins now". Despite the warm reception to the vote, UK Music boss Michael Dugher, Blur drummer Dave Rowntree and BPI chief Geoff Taylor explain why the battle is far from over yet.

We look ahead to this Thursday's Mercury Prize and analyse what a nomination means for an artist in 2018. We look at the impact a place among the 12-strong shortlist has had on this year’s albums and speak to four of the nominees.

Elsewhere, Rhian Emmanuel hails a “significant evolution” for Christine And The Queens as Because Music targets streaming sale for the French star's imminent comeback LP, Chris.

After a summer in which it has welcomed the likes of Britney Spears, Lionel Richie and Noel Gallagher, we find out how Scarborough has become the UK's unlikeliest live music hotbed, while we take a trip down memory lane with East London's Troxy after the venue celebrated its 85th anniversary.

In Hitmakers, Scott English remembers his ever-changing hit Mandy while, fresh from winning the Special Recognition gong at the AIM Awards 2018, Cherry Red Records founder Ian McNay reveals what’s he learned from over 40 years in the biz...

Sync Story goes inside the link up between ITV's Vanity Fair and Afterhere, and North East tunesmith Sam Fender is featured On The Radar.