Perfect moments: The best bits of the Music Week Women In Music Awards 2018 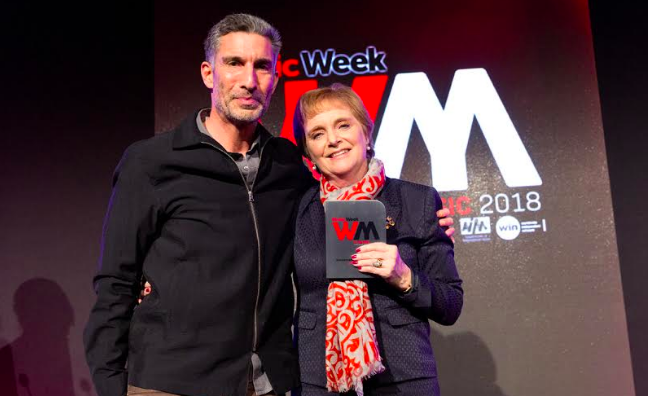 Well, that's it for another year. The Music Week Women In Music Awards 2018, in association with AIM, UK Music & WIN, came to a delirious conclusion on Friday night (November 9) as Outstanding Contribution winner Jane Dyball left the stage to walk into the melee of embraces, cheers and group photos.

This year's show provided the best kind of carnage, as a group of superstar artists and executives gathered to celebrate the achievements of some of the music inudstry's best operators.

As ever, there was a great deal of love (and noise) in the room, as award winners including Night Czar Amy Lamé, YouTube's Helen Marquis, team PPL and Attitude Is Everything's Suzanne Bull underlined the sheer depth of talent the music industry has at its disposal. Of course, the problem the business still has with how to harness and reward that power was a theme throughout a lively afternoon, but this was a celebration of talent, expertise and groundbreaking achievement.

Mick Jagger clapping along via his tribute video summed up the whole show, as The Rolling Stones' manager Joyce Smyth (pictured above with Universal Music UK chairman & CEO David Joseph) was honoured with the Businesswoman Of The Year trophy. So too did team Glassnote's delirious reaction when UK MD Liz Goodwin was invited on stage to celebrate her place on the 2018 Roll Of Honour.

Read on for the best moments of a very emotional occasion...

We didn’t have to wait long for the first outpouring of noise at the fifth edition of the Music Week Women In Music Awards. Accepting the Rising Star award, the first of the afternoon, Parris O’Loughlin-Hoste began with a list out shout outs for the “amazing and incredible” people the 25-year-old has come to know in music so far. RCA’s senior urban artist manager namechecked a list that stretched from Jason Iley and David Dollimore to Taponeswa Mavunga, Stacey Tang, Sarah Hall, Cassandra Gracey and Rachel Campbell. O’Loughlin-Hoste increased the volume levels with her closing lines, outlining her vision for the years to come. Leaning over the mic stand towards the crowd, she said: "The future of the music industry is diverse, passionate, representative and most definitely female."

Janée Bennett first met former Music Week cover star Jess Glynne when giving a talk at the singer’s music college. Years later, they’ve forged a partnership that has helped Glynne to a record seven UK No.1 singles. The two have shaped each other’s careers, and have grown together. It was fitting then, that Glynne arrived on stage ready to get misty-eyed while presenting her friend with the inaugural Music Creative award. Jin Jin’s video tributes featured a glittering cast of publishers, A&Rs, artists and more. Atlantic’s Briony Turner and Alec Boateng got particularly gooey, thanking the Manchester songwriter for keeping them in business. But the star of the show was Jin Jin’s mum Janet, delivering heartfelt hometruths and praise from the comfort of her kitchen. The emotion spread quickly from the room, and Janet was still reeling from a heady afternoon as hugs were dished out at the end of the ceremony. “Jin Jin and her mum are exactly the same person,” Glynne told Music Week. “They’re amazing.”

Spotify’s head of editorial Austin Daboh walked with a spring in his step as he headed towards the stage to present South London rapper Ms Banks with the New Artist award. He was buoyed by a wide-ranging list of talented executives that he eagerly read aloud to the room, to emphasise the crucial role of women in the music industry. “Women are role models around the industry,” he said. “You are all role models for the next generation.” Ms Banks, who Daboh tipped for big things in 2019, represents that new wave, and her story also chimes with how difficult the business can be. Daboh mentioned the struggles female rappers can face, and Banks arrived on stage with a simple message. Having revealed that her preparations were limited (“I didn’t plan a speech, I like to freestyle”) she told the audience: “I’m trying to teach women that we’re powerful and we can overcome, no matter what.” The room was left excited at the prospect of the impact Ms Banks will have in the future.

Skunk Anansie superfan Nadine Shah set a high bar with her presenter’s speech for the Inspirational Artist award. Shah flew in from Iceland for the occasion, such was her desire to meet her idol, Skin, and she spoke passionately about how the Hedonism (Just Because You Feel Good) video had “changed my life”. Shah concluded, succinctly, that the Skunk frontwoman is “cool as fuck” – sentiments that were clearly endorsed by the amount of selfies Skin did with fans both young and not-so-young after the ceremony. Her own speech, meanwhile, spelled out exactly what makes her so special. “It’s been hard being me,” she said. “It’s been a fight, it’s still a fight, but it drives you to work harder to be what you want to be. Keep striving!”

Scenes from our #womeninmusic awards 2018 as lunch gets underway

THE JOY OF JOYCE

“I’m the most non-rock'n'roll person you could possibly meet,” apologised Rolling Stones manager Joyce Smyth as she took the stage to accept her Businesswoman Of The Year award (her first since “winning the Latin Cup in the Sixth Form”) from Universal Music UK chairman & CEO David Joseph. Joseph made the point that Smyth has managed to keep an astonishingly low profile given her role, but that will surely change after her barnstorming speech, which took in everything from inspirational advice to amusing stories about working with the world’s greatest rock’n’roll band. Our favourite? The time she told Keith Richards that Moonlight Mile’s “head full of snow” line reminded her of Robert Frost's classic poem, Stopping By Woods On A Snowy Evening and asked what they meant by it. “He looked at me as if to say, ‘What is she on?’ Or, in my case, what am I not on!” Rock'n'roll or not, Smyth certainly rocked the ceremony.

The final award of an incredible #womeninmusic awards is our Outstanding Contribution, which goes to the legendary Jane Dyball of @thempaonline

Jane Dyball’s well-deserved Outstanding Contribution prize for a stellar career was handed over by Catherine Mayer, co-founder of the Woman’s Equality Party. Mayer suggested that, given Dyball’s undimmed desire to make an impact with everything she does, she should really be winning the Rising Star award. And Dyball certainly seemed to relish a rare moment in the limelight with a hilarious, life-affirming speech that spelled out exactly why she’s had such an enormous influence on the worlds of publishing and licensing. “It always mystifies me how you would get an award and feel humbled,” she quipped, “There’s a significant risk this is just going to go straight to my head!” Not that it’s all been easy, of course. “Sometimes it hasn't felt like work at all,” she said. “Sometimes it's felt like banging my head against a wall. But failure is good: when you get to my age you can tell anecdotes about it!" Dyball’s plans for after she leaves the MPA next year are yet to be finalised but you suspect failure will not be an option. All hail!

By Ben Homewood and Mark Sutherland