'Sales have been growing for five straight years': Fender CEO Andy Mooney on why guitar music is far from dead 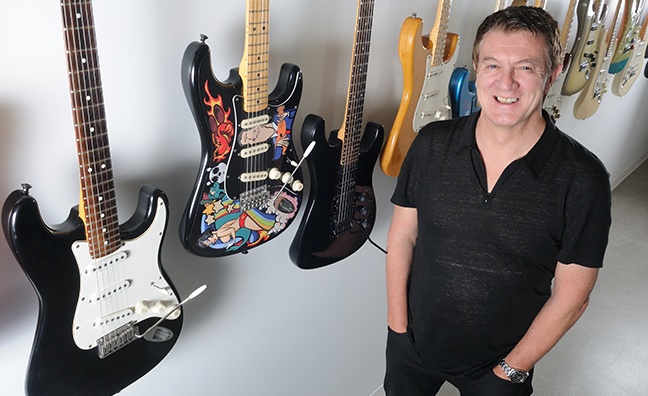 In the new edition of Music Week, metal titans Slipknot head up our Rock Issue 2019 special, which also features Foo Fighters’ Chris Shiflett plus an interview with the Download Festival 2019 team and much more.

As part of our celebrations, we also speak to Fender CEO Andy Mooney for a wide-ranging chat about the presence of guitar music in the charts, streaming, and the number of consumer and artist initiatives they have recently unveiled.

This year the company launched a new annual global artist marketing programme christened Fender Next, providing global performance opportunities and Fender products to artists such as Tom Misch (UK), Ashley McBryde (USA), Fidlar (USA), Japanese Breakfast (USA), Phoebe Bridgers (USA), Sam Fender (UK) and others. All will benefit from promotion on the brand’s 16 million followers across platforms, entailing social media activity, mini-documentaries, takeovers and PR/communications support, as well as the opportunity to be featured in Fender marketing launches and ads. Fender also launched Fender Play – a comprehensive, online video tutorial platform geared around making sure that people who first pick up the instrument don’t abandon it.

In a day and age where ‘rock is dead!’ and, recently, ‘rock is back!’ vie for headline space, as one of the most iconic guitar brands of all time, Fender have a unique insight on the subject.

“The good news about the industry, despite the occasional misinformation that you see in the media, is that not only is the guitar far from dead, the industry has been growing organically since 2014,” Mooney told Music Week. “The two big drivers for that are growing consumption of recorded music, because we’re fast-approaching 200 million people who are paying for a monthly streaming service, and the interest in live music is at an all-time high, particularly in the festival season.”

Interestingly, Mooney was also quick to dismiss any assumptions that guitar-based music has suffered from the rise and rise of hip-hop and pop…

Despite the occasional misinformation that you see in the media, not only is the guitar far from dead, the industry has been growing organically since 2014

“Most people who talk about that have never actually seen a major hip-hop artist in concert because there is a band onstage [laughs],” said Mooney. “Kids these days are not looking to find the chords for Stairway To Heaven or Smoke On The Water, they’re often looking for chords from songs by Chance The Rapper or songs that don’t even have guitar as the root in them, but actually have chord structure that the sounds of artists like Chance The Rapper want to play along with.”

As to what he makes of the much-parroted ‘rock is dead’ claim?

“I always like going back to data,” replied Mooney. “The data would absolutely refute that – the guitar sales have been growing steadily in the high single digit realm for five straight years.”