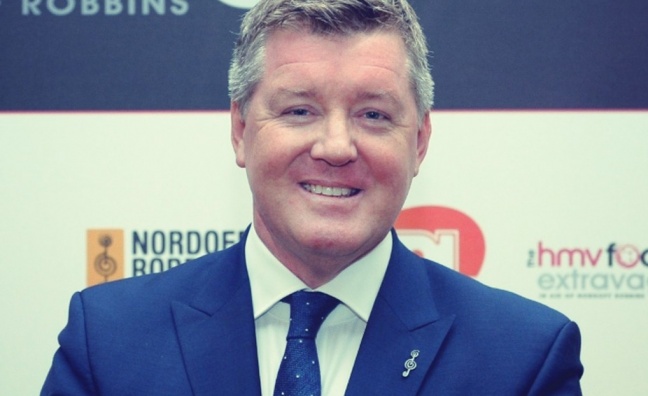 After 22 years of service, McLaughlin will officially leave his post after this year’s event on October 2, with Shreeves (pictured) taking up his new role for 2018.

McLauglin has helped to establish the charity dinner, which has raised more than £7 million for music therapy charity Nordoff Robbins, as one of the most anticipated events in the football calendar.

“I’m incredibly proud to have been chairman for over two decades helping to create a respected charity fundraiser which now commands a true heritage within football," he said. "Geoff is the perfect choice to continue the good work of Legends of Football supporting Nordoff Robbins in its continued commitment to changing the lives of vulnerable and isolated people across the country.”

Previously known as the HMV Football Extravaganza, the dinner was rechristened Legnds Of Football in 2016. It returns on October 2 at the Grosvenor House Hotel, London for its 22nd year. As previously announced, Liverpool FC icon Steven Gerrard will be the latest footballing great to be honoured with the prized Legend of Football Award and Liverpool's The Lightning Seeds will perform on the evening.

“What an honour to follow Brian as chairman of the Legends Of Football, and, working alongside the rest of the Fundraising Committee," said Shreeves. "Brian and other founding member Steve Knott, who is also stepping down after the best part of 22 years devoted service, leave an incredible legacy and we are profoundly in their debt for all their time, energy and remarkable generosity of spirit. Football icons ranging from Sir Stanley Matthews to Sir Alex Ferguson and David Beckham to Pelé honoured, and crucially over £7m raised to date for Nordoff Robbins and its vital music therapy work.

“Thank you so much Brian and Steve - we’ll do our very best to fill your shoes, and we look forward to making this year’s event honouring Liverpool legend Steven Gerrard one of the very best to give you the send-off that your incredible commitment and achievements so richly deserve.”

Paul McGowan, executive chairman of Hilco Capital, owner of event sponsor HMV, added: “We’re excited to welcome Geoff into his new role and would like to express our sincere gratitude to Brian for his fantastic work over the years. It’s been an absolute pleasure working with him and now we’re looking forward to a longstanding relationship with Geoff to support the fundamental work of Nordoff Robbins.”

The 2017 event is close to sold out, with the last few packages available here.