The 12 syncs of Christmas 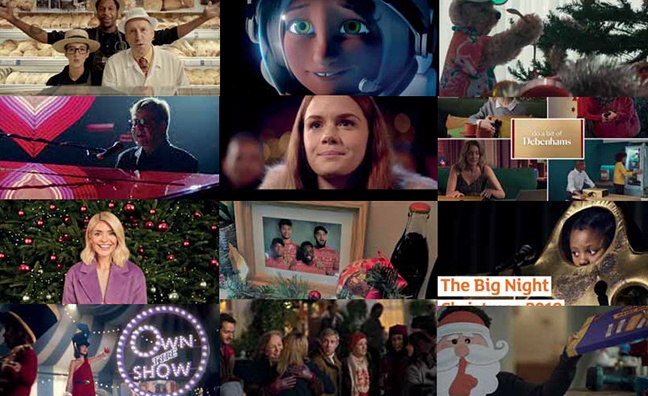 Christmas is just around the corner and the music business is almost ready to take a well-earned rest. Chances are, your time off may or may not involve some minues in front of the telly. Here's our guide to the big sync hitters of the season. Pass the eggnog...

Arguably the biggest Christmas song of all time, as sung by the friendly faces of the High Street. From the butcher and the baker, to the book shop and, yes, the record shop, Visa’s spot really taps into the communal spirit of Christmas. Let the cash registers ring!

A rare original composition this year, Very’s ad shows that Christmas can kickstart dream careers, in this case, being an astronaut. Young musician Reeah plays on the composition by Native Music’s Guy Farley. “It’s a beautiful soundtrack with the uber-talented, 11-year-old Reeah,” says Native MD Dan Neale. “It was a great experience.”

The Heathrow bears return for another Christmas ad, which shows just how important loved ones are at this time of year. Our furry friends swap Florida for London, touching down in comfort, of course. The crashing drums of Paul Young’s 1985 hit Every Time You Go Away ensures a suitably emotional soundtrack.

John Lewis make a big yuletide splash as ever, diverting from its Christmas cover tradition and embracing Elton John’s Your Song (reinterpreted by Ellie Goulding for this spot in 2010) to chart the story of the piano man’s journey from tousle-haired kid to million-selling star. Something of a curveball from the department store.

Following last year’s successful ad featuring Yazoo’s 1980s banger Only You, Boots return for 2018 with an offering that delves into the ’90s. This spot reimagines World Party’s 1997 track She’s The One, covered by Robbie Williams two years later. It’s a touching clip, and the ad-libs mixed in with Karl Wallinger’s original lyrics make for an imaginative seasonal package.

Sony Music UK director of sync Ian Neil tells Music Week that this year’s festive big hitters are notable for a relative lack of Christmas songs, Visa aside. Yorkshire soul singer Kiki Dee was the first British female to sign to Tamla Motown, and her 1981 song Star is a bundle of joy. Naturally it fits the department store’s campaign, which explores just how good Christmas can make you feel.

Marks & Spencer follow 2017’s Paddington Bear campaign with new Christmas ambassasdor Holly Willoughby, who pilots a seasonal advert showing the wares of the 134-year-old store. Tom Jones’ Give A Little Love, from 2008, shimmies in the background before a throaty vocal pay-off right at the end. Classic.

One Christmas sync isn’t enough for Coca-Cola this year, as the drinks giants supplement their traditional Holidays Are Coming advert with a version featuring a cover by X Factor stars Rak-Su. Music has been central to Coke’s festive campaign: the company also partnered with The Kingdom Choir and Capital FM’s Jingle Bell Ball.

SPOT: The Big Night ARTIST/MASTER: Re-recorded TRACK: You Get What You Give PUBLISHER: Spirit/BMG AD AGENCY: Wieden & Kennedy London

Few things scream Christmas like sparkly costumes and ensemble singing, and this Sainsbury’s spot takes the supermarket crown – although Iceland rightly turned heads with its environmentally-conscious ad. A group of the nation’s best young singers take on New Radicals’ 1998 hit You Get What You Give and, predictably, the results tug at the heartstrings no end.

It turns out that albums chart top spot hogger The Greatest Showman has the power to penetrate the festive ad market, too. This use of Panic! At The Disco’s cover of the film’s Greatest Show paved the way for Littlewoods to stock The Greatest Showman: Reimagined album, too. Nice work, Warner Music UK...

In which national treasure Martin Freeman is bailed out of forgetting to buy a Christmas pressie for his Auntie Sue by Vodafone’s impeccable 4G coverage. Of course, his response is to ice skate acrobatically to the strains of Beautiful Dreamer, the use of which comes as a timely boost to the campaign for Orbison’s orchestral LP Unchained Melodies, which hit the Top 10 last month.

Proof that you don’t have to be a big hitter to get a Chrimbo sync comes from rising soul singer Mathilda Homer, who covers The Beatles’ Do You Want To Know A Secret in whispery fashion for Cadbury. Homer is still independent, and music supervision for the advert came from Laura Harrison at Soho Music Group. Rest assured, yule absolutely love it!