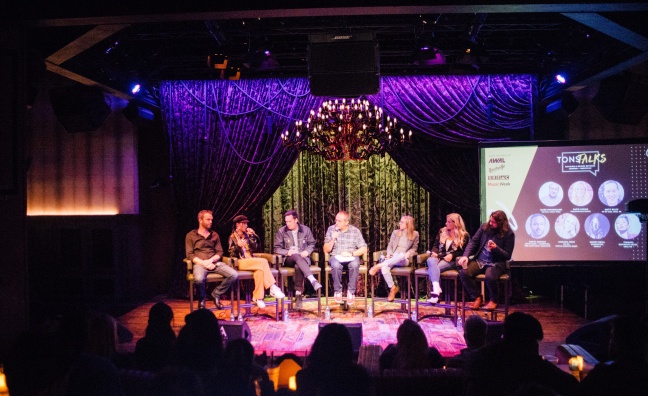 Music Week has just returned from a few days in Nashville. Last time we were there, we explored the country scene that made the city famous as a music destination.

But this time, with Music Week partnering with The Other Nashville Society and AWAL for London Artist Immersion Week – which saw UK artists such as Millie Turner and Iyamah fly to Tennessee for a week of songwriting sessions and meetings – it became apparent that there’s much more to Nashville than honkytonks.

At the panel discussion we hosted (pictured), it was striking just how many music biz professionals have moved to Nashville in recent years, many of whom have nothing to do with country music.

You’d expect songwriters to want to tap into the town’s prodigious talent and unique approach to hitmaking. But there are also managers such as Red Light’s David Adcock and pop publishers such as Prescription Songs’ Katie Fagan following in the footsteps of rock superagent Scott Clayton, now at WME, but one of the first to set up a non-country business there a few decades ago.

All speak passionately about Nashville’s perfect storm of talent, accessibility and community as key to drawing in artists, writers and execs from New York, Los Angeles and London. Indeed so many are flocking to the city that some worry it could lose its unique set-up, where songwriters can be pulled into sessions after chance meetings in nearby coffee shops, and an area like Berryhill can house over a dozen studios, small and large, all brimming with ideas and enterprise.

But most believe Nashville’s unique spirit, which crosses country and non-country lines, will win through. There are lessons for other music capitals in that too. The British artists on Immersion Week spoke of the joys of an industry where people’s first instinct is to help everyone to the top together, rather than turn it into a winner-takes-all contest. The industry arrivals from LA spoke with relief of having escaped the pressure to not just make it, but make it bigger than anyone else.

There’s much talk these days of how you can base yourself anywhere and succeed. But the right creative environment can still make a huge difference to careers. Nashville is making a play to win hearts and minds, and London and LA would do well to listen.